By Hook or crook, the Dragons have started their rebuild in 2021. It looks like another of 'not much pleasure but plenty of pain' for the joint venture side under Anthony Griffin.

Last season was rock bottom for the Red V. Paul McGregor was in-and-out like the hokey pokey, but the former Steeler and Dragon was mercifully sacked before the Round 14 clash against the Eels. St George Illawarra then limped their way to the line with six wins in the COVID-affected 2020 season to finish 12th.

That finish flattered the Dragons, who were a bottom rung side in 2020. Not much will change in 2021 with the return of a majority of the side which ran out last season. The big change comes in a homecoming for Jack Bird and new coach in Griffin.

The rebuilding job ahead for Griffin is one that would be make Bob the Builder wince. 'Hook' has been out of the coaching ring since 2018. There have been some sprinkles of Griffin's work already in the 2021 side. Andrew McCullough - who Griffin coached in Brisbane - signed late in pre-season and Griffin has expressed confidence in both Ben Hunt (who was made captain) and Corey Norman to reproduce their best.

Simply put, the Dragons will be a bottom four side in 2021, but there is plenty of talent in the side which Griffin has to unlock if they want to breath more than just smoke against teams. This year might be the turning point for the side where they start to push the rebuild boulder up the hill - or they may well continue to run up that hill of mediocrity.

Whilst it's set to be another tough year for the Red V, fans want to see some form of plan and improvement from the side - something that was a big complaint in the McGregor era. Otherwise, Griffin will become another of the long line of failures at the joint venture since Wayne Bennett's departure a decade ago - and he might get the Hook sooner rather than later.

Hahahaha.. Oh seriously? Well, if the all the other clubs had salary cap breaches it would leave the Dragons to be Premiers by default.

The club is entering their rebuild so it might be a while before they can taste Premiership glory again. There is always the 2010 Grand Final DVD to enjoy though!

If the Dragons want to make the top eight, it will rest on their stars - Hunt, Norman, Lomax, Dufty - to be consistent across the whole season. All have shown that they can be class players and if it clicks with a bit more starch in defence, it could be a quicker rebound for the joint venture. Most likely it won't be though.

This is the start of the pain for the Dragons. Griffin was brought in to reshape the club after the disaster which has been the last few seasons. There is still plenty of big contracts and issues which surround the club, not to mention a roster which will struggle to win more than six games this year.

The departure of Tyson Frizell and the loss of Cameron McInnes to injury has weakened the Dragons already maligned forward pack. Dragons were soft through the middle last year and plenty will rest on Paul Vaughan and Tariq Sims to lift them to some respectability.

With a club in the Dragons' position, the fixture is just tough all round. It starts with a home derby at Kogarah against Cronulla. The hardest clashes come on ANZAC Day (Roosters), Magic Round (Storm) and prior to Origin 2 (Canberra), with a super-tough run home which includes the Raiders, Panthers, Roosters and Rabbitohs. 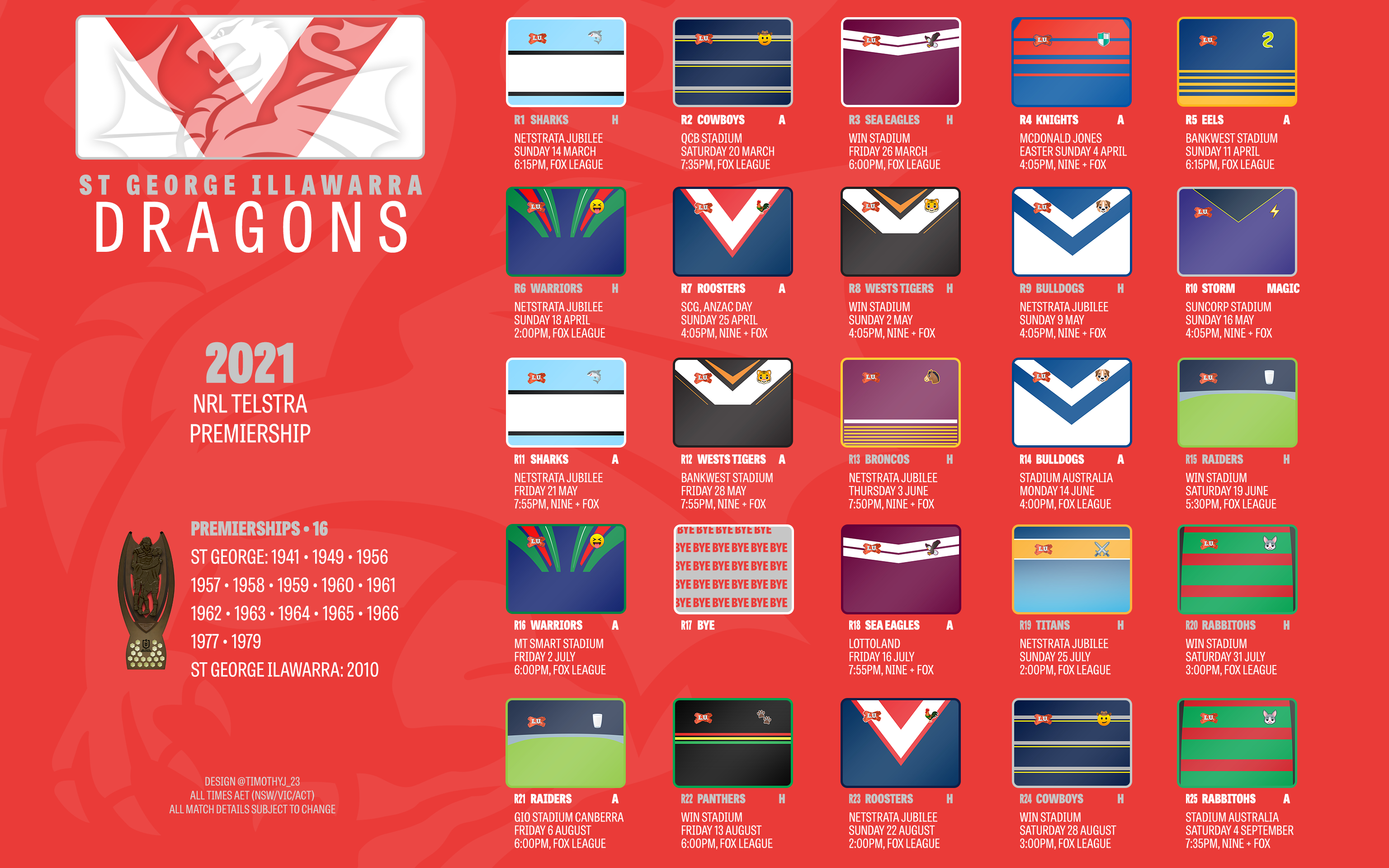 This is the tipping point for two much maligned figures at the club. Both Ben Hunt and Corey Norman came to Dragons with big reputations but have failed to fire. Hunt was named club captain and will take on plenty of responsibility. If Griffin can stick to a consistent halves pairing it might help spark the former Australian representative.

At times in 2020, Zac Lomax played a lone hand for the points-shy Saints. The centre locked down to a long term deal and probably will be the leading point scorer for the side again. Up front, Paul Vaughan needs to bounce back to the form which saw him play Origin in a Dragons pack which is lacking experience in 2021.

One of the bright spots at the end of a torrid 2020 was the flying Cody Ramsay. The long-haired winger debuted with a pair of tries (probably should've been a hat-trick) against Canberra and has injected some youthful energy to the side. The Dragons rewarded that hot start to life in the NRL with a three-year-deal last week.

Besides Ramsay, there is some exciting backline prospects coming through the Dragons ranks. Max Feagai got a taste of first grade late in 2020 and his brother Mat is waiting to make his debut but might push through this season.

One this writer and most Dragons fans will be keen to see on a permanent basis is half Jayden Sullivan. The youngster showed no fear in his only game last year and got tongues wagging with his hard running and kicking game which might see him surge into the halves equation if things go south early in the season.