I said in this very preview last year that Penrith are a club who promise the world every year but usually deliver an atlas.

Thankfully, 2020 was the year they delivered on their promise, getting all the way to the Grand Final before falling at the final hurdle - when they nearly pulled off a miracle comeback.

There are many that think that the Panthers were lucky in 2020, but there is no doubt an eagerness to go one better this season and with an extra year under their belt, they could be set to take their first premiership since 2003.

Penrith went through 2020 with just one regular season loss and showed that they will be a dominant force in the future. Refereeing controversy was arguably the only thing that stopped them from being able to match the Melbourne Storm through the first half of last years decider.

The Panthers have a solid squad of players who have been playing together for quite a while and it is that bond that runs through the team which has seen key combinations build, with the likes of Nathan Cleary and Jarome Luai becoming one of the most dangerous halves pairings in the NRL. The halves will play a vital role, with both Cleary and Luai playing with confidence - and already in both the All Stars and pre-season trial matches, Luai has already shown he's ready to pick up from where he left off in 2020.

The forward pack for Penrith is also still very underrated - and even after losing veteran James Tamou, the strength of their pack is solid with the likes of James Fisher-Harris, Moses Leota and young gun Spencer Leniu who all looked very dangerous, and did a good job at pushing the Parramatta defensive line over the weekend in the trial match at Panthers Stadium.

New rules could be a help to the Mountain Men too - the speed of Api Koroisau out of dummy half is set to cause more issues for opposition defence, with his agility and speed from the ruck able to catch out tiring defenders, and with more tiredness coming into the game, Api could take advantage. As too could the other players like Luai, whose stepping ability and speed could see him take advantage of tiring defence - something he did to great effect last season and on the weekend. The speed aspect of the game will also suit winger Charlie Staines, who showed what he can do in the one and a half games he played scoring six tries.

Backing up such a strong season is going to be a challenge for the Panthers and with teams being able to cope better to a (hopefully) non-COVID affected season, they should be stronger through the competition. Consistency will be key through 2021 and putting in full 80-minute performances is still something that they have struggled to do for quite a while now - even with last years success.

The loss of some key experience will be something the Panthers need to overcome, with the losses of winger Josh Mansour and prop James Tamou being key to the lineup, especially with the latter's captaincy and power in the front row. Even though they are being replaced by players who have similar or potentially greater talent, the work these players do in the side is going to be a big loss, especially with Josh Mansour's hard running from his own end, which the Panthers built their sets upon in 2020.

The Panthers have a good opening first two rounds coming up against the Cowboys at Panthers Stadium in Round 1, which should be a good contest, before they will take on the Canterbury Bulldogs at Bankwest Stadium in another tough but likely winnable contest.

The first big test comes up in Round 3 when they take on the Melbourne Storm on March 25, the first meeting between the two sides since last year's grand final, a game which will be played at Panthers Stadium on a Thursday night.

Penrith then have some easier - but still tough - games through the next few weeks with Manly & Brisbane playing host to Penrith whilst also at home to Canberra and Newcastle in alternating weeks. The annual Bathurst match is taking place in Round 8 this season when the Manly Sea Eagles make the trip over the Blue Mountains for the first time, which is part of a three-home game stretch sandwiched by the games against Newcastle and Cronulla.

Around Origin time the Panthers draw is rather kind to them with a game against the Tigers being likely the only game where the Panthers will miss key players such as Nathan Cleary (if selected).

The last six weeks of the competition are where Penrith look set to be tested with games coming against Melbourne, the Roosters, Souths and Parramatta sitting in the road to the finals. These games will play a big part in the final standings of the 2021 ladder both across the competition and indeed for the Mountain Men. 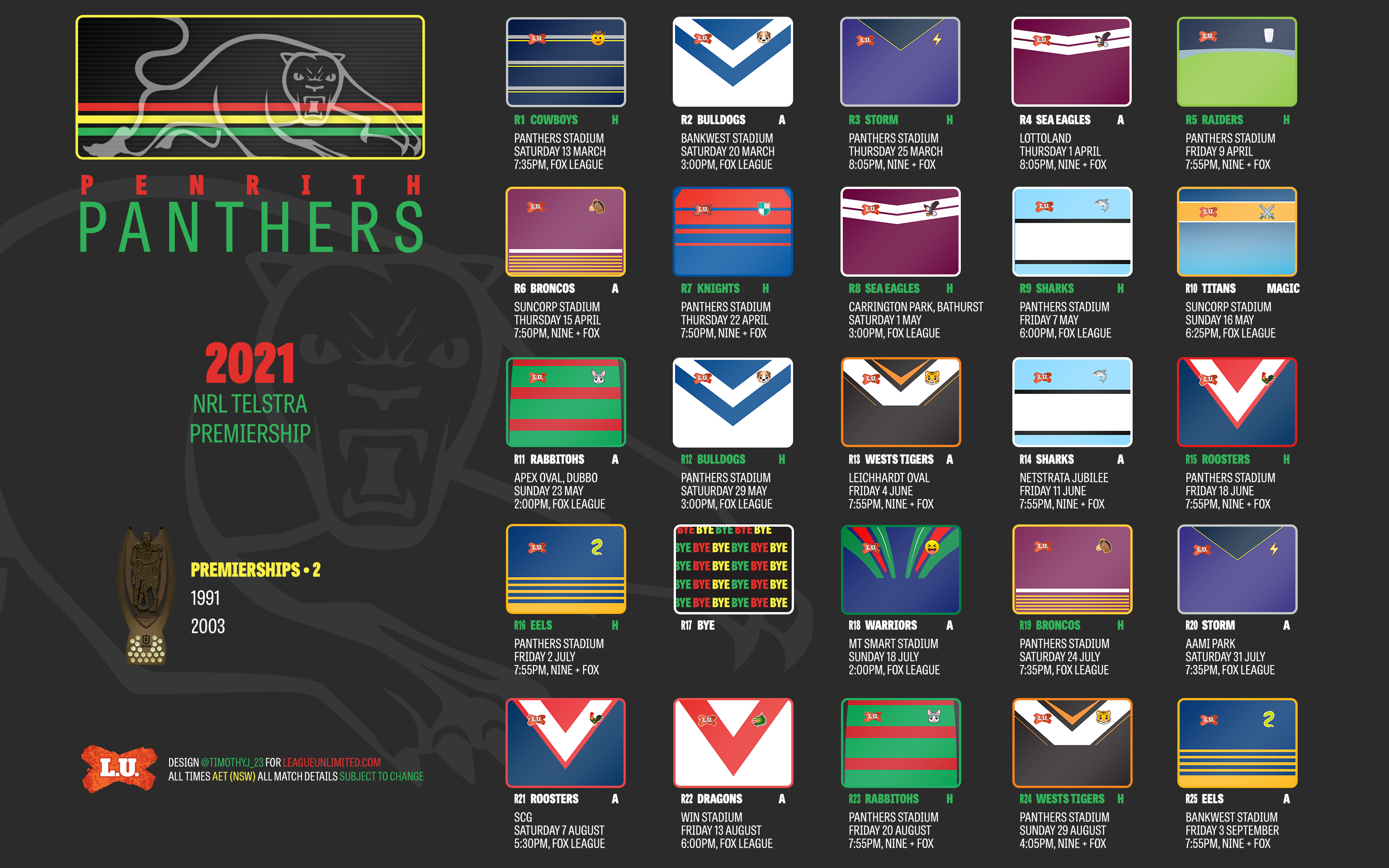 Unsurprisingly, Nathan Cleary is going to be key for the Panthers in 2021. His form throughout 2020 was a career highlight, but despite a strong season he came in for strong criticism during the State of Origin series, which shows that despite a good year, he still needs to prove himself at the top level which he can do by leading the black, red, green and yellow to a title this year.

Alongside Cleary in the halves, Jarome Luai will also be vital, after rising to stardom last season. His deceptive speed and agility was a key part of Penrith's attack and his performances will be just as important given that his contrast to Cleary and his unpredictability was something else that ensured the side's winning run continued for so long.

Looking elsewhere in the lineup, the whole forward pack will be a key cog for any premiership tilt, and the power of James Fisher-Harris will be of utmost importance for Penrith with their go-forward relying on he and Moses Leota to set a platform for the speed men and the halves. Api Koroisau's dummy half work is also going to be much-needed with his speed and deceptiveness from the ruck very important going forward.

Everybody saw the 'Forbes Flyer' Charlie Staines light up the park against the Sharks on debut where he scored four tries, and then against Manly a few weeks later where he picked up a first half double before succumbing to a hamstring injury. Staines has plenty more to come on the park and with a full season ahead following the departure of Mansour, he is set to have a big year and could be dangerous - provided he can avoid injury and stay on the park.

One rookie who has yet to set foot in NRL - but looks to have a big future - is youngster J'maine Hopgood. The Queenslander has been part of the Panthers' system since the SG Ball competition, where he captain the Panthers' Under 18 side and showed plenty of talent on the park. He quickly rose to the NSW Cup level in 2019 where he made a big impact, which netted him a Development contract in 2020 and then eventually an NRL contract for season 2021. Hopgood possess strength which will help the Panthers going forward but he also has a good passing game and can be a danger on the outside of the ruck.