So Cameron, save the last dance for me...

If you were a Melbourne Storm fan in 2019 you could be forgiven for spending most of the season thinking it was about to be a dream come true. Rampant minor premiers with a season that's up there with the best of all time on several statistical fronts - however when it came time to find another gear the boys in purple were found wanting.

Defensively they remained resolute, however the slick attacking moves from regular season went missing. A controversial loss against Canberra in the first week of the finals (and let's park that touch judge error) where the referees admitted to missing two sin bins, was followed up with putting a hapless Parramatta to the sword - however it was 2018's conquerer the Roosters who once again ended the Storm's premiership aspirations, albeit a week earlier than the year before.

As we look forward to 2020, two of the main tormentors of the last two years are no longer in the red white and blue, however you have to wonder whether the mental demons have already taken hold. On paper the Storm are slightly weaker than last year with the losses of Curtis Scott and Will Chambers, but it's worth keeping in mind that Scott spent most of the year injured and Chambers was out of the side by season's end. The biggest concern for the men in purple is the number 7 or lack thereof. Jahrome Hughes is a very talented fullback / utility, but is he a premiership winning halfback? I'm yet to be convinced.

On the other side of the coin Storm fans have a couple of reasons to be excited for 2020. The man who forced Hughes from the #1 into the #7 is firmly at the top of this list.

In 2019 Ryan Papenhuyzen put up some spectacular numbers in his remarkable debut season, and having now spent a full preseason training at fullback, big things should be expected.

The ongoing development of the world's biggest human in Nelson Asofa Solomona is another cause for hope. By the end of 2019 he was in the top tier of props in the game - if he can take his game to another level again then go-forward will not be an issue for the Storm.

Lastly we have father time himself. When Cameron Smith made his debut I was less than half the age I am now, in fact I'm pretty sure that he probably could have driven the school bus for at least five of the Storm's current top 30 list. If Cam can deliver another vintage season in 2020, then the Storm will be in the conversation at the business end of the season - but if time finally catches up with him then that will be all she wrote.

Motivation. Aside from maybe the Raiders you'd be hard pressed to find a team with more motivation than Melbourne. Not only did they bow out in disappointing style last year after dominating the regular season, they also have the added incentive of sending a club legend and future immortal out a winner. Beyond motivation, this is the last season of a golden generation of players for the Storm with, a number of stars already confirmed to be heading for the exit at the end of the season, including Josh Addo-Car and Suliasi Vunivalu.

As ageless as he has been surely this is the year that father time catches up with Cameron Smith. If there is any dip in his influence over games, then the Storm could struggle in 2020. Outside of the number nine, the departures of Chambers and Scott leave the Storm a little thin on backline talent should any injuries hit.

Melbourne start their 2020 campaign out on the road with trips to former Grand Final foes Manly and Cronulla. After that they play four of five matches in the creature comforts of their AAMI Park home, stopping only to visit the Cowboys' new venue in Townsville in Round 6.

Their Origin period is mixed - a bye before Game 1 but followed straight after by a home game against Grand Finalists Canberra on the Saturday. The Knights, Broncos, Tigers and Titans are their opponents over the rest of the Origin months, and they'll be without their stars for the Tigers clash - albeit at home.

Their run home sees them at home four of the last seven rounds, with two trips to Parramatta (Eels and Rabbitohs), and a final round road-trip to Canberra. 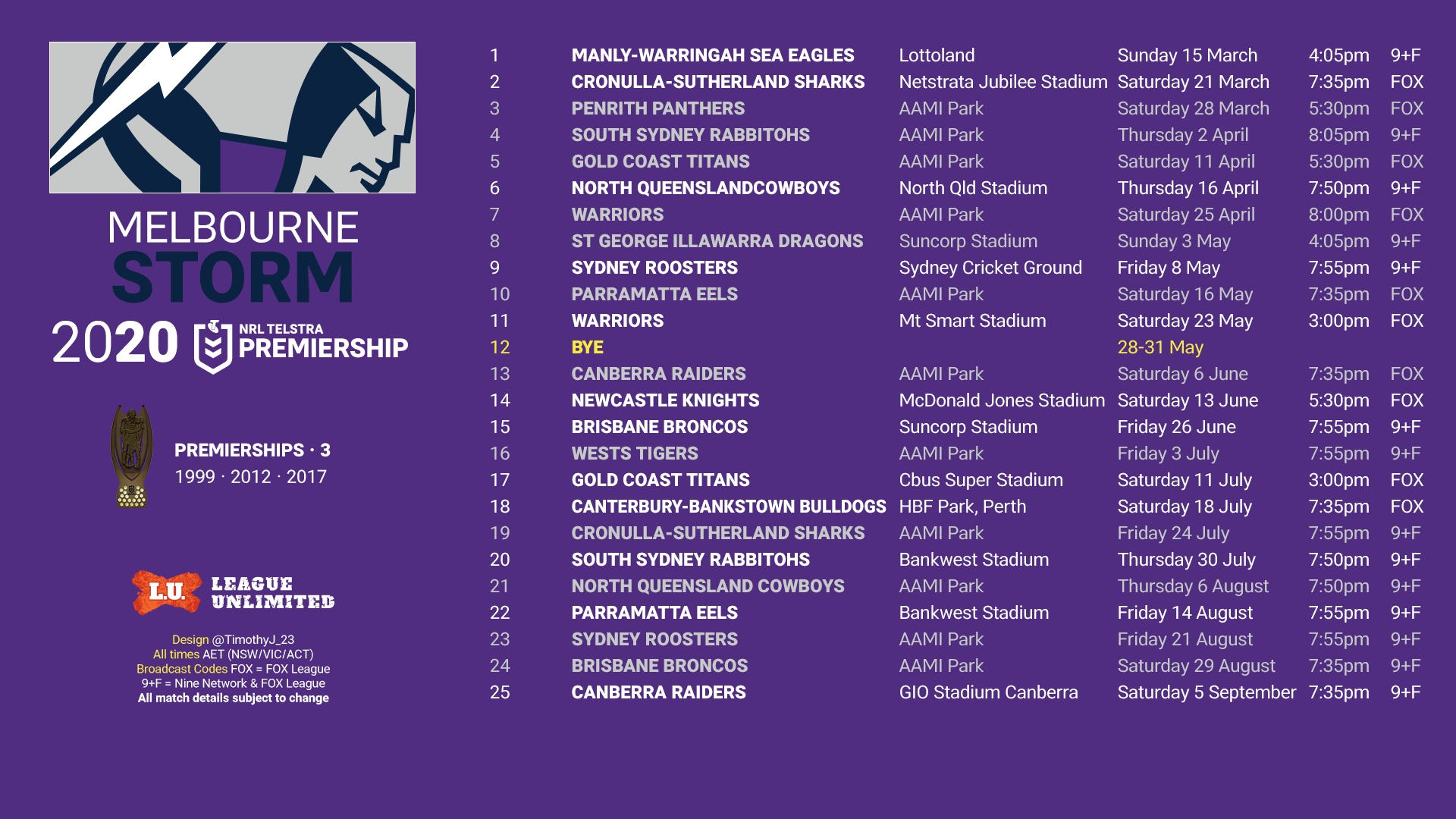 Two players with the same name hold the key for the Storm this year, if one or both of the gentlemen named Cameron (Smith or Munster) fail to have a good impact this year, then the Storm will again fall short of premiership glory. Outside of these two, it's the other two members of the spine in Hughes and Papenhuyzen, solving what became a very clunky attack in the latter stages of 2019. It means all four players are hugely important to success for the Storm, perhaps moreso than any other team.

Whilst he almost turned out for the Wests Tigers this season (an NRL loan deal between the two clubs shut down in recent days), Harry Grant is one to watch. The heir apparent to Cam Smith's hooking role, expect to see the reigning Intrust Super Cup player of the year getting regular minutes off the bench for Storm this year.