The New Zealand Warriors may have missed out on the top eight in 2020, but given the circumstances few would deny the year as anything other than a success.

Forced to relocate to Australia after the New Zealand Government announced border closures just moments before kick-off in their opening match, the unexpected nomads overcame the added burden of coach Stephen Kearney's shock dismissal to finish two wins shy of the finals in 10th position.

Heading into 2021 with Nathan Brown at the helm after interim mentor Todd Payten opted to return to Australia, the former Newcastle coach will be determined to build on the character growth of last season in an effort to transform the perennial underachievers into premiership contenders.

Welcoming seven new faces to the squad, headlined by formidable front rower Addin Fonua-Blake, the likes of Kane Evans, Ben Murdoch-Masila and Bayley Sironen will add plenty of punch to the forward pack. Outside back Marcelo Montoya and playmaker Sean O'Sullivan will be hoping for injury-free campaigns, while a change of scenery may be the catalyst needed to turn Euan Aitken from a representative pretender to contender.

Few would have blamed the Warriors for throwing in the towel given the challenges of last season. Uprooted to a different country due to forces beyond their control, the side refused to surrender to remain in finals contention until the final fortnight of the season. Adding additional class to an already talented squad, the newfound resilience should see the Warriors vie for a top eight finish at a minimum.

While many clubs are set to have their depth tested as a result of no lower grade football being played last season, the Warriors are unlikely to be afforded the favourable treatment of being able to call upon loan players. Benefitting greatly from the willingness of the Roosters, Panthers and Eels to engage in short-terms loans, the side's depth looks set to be tested when injuries and suspensions strike.

Remaining in Australia until June due to COVID-19 travel restrictions, the Warriors will enjoy a long awaited return to New Zealand against St George Illawarra in Round 16 - almost two years after their last premiership fixture in Auckland.

A challenging start to the year will see the side face three incumbent top eight teams over the first month, while barring further travel restrictions five of their final ten matches will take place at Mt Smart Stadium.

The Warriors will begin their 2021 campaign on the Central Coast with an afternoon clash against the Titans on Saturday, 13 March. 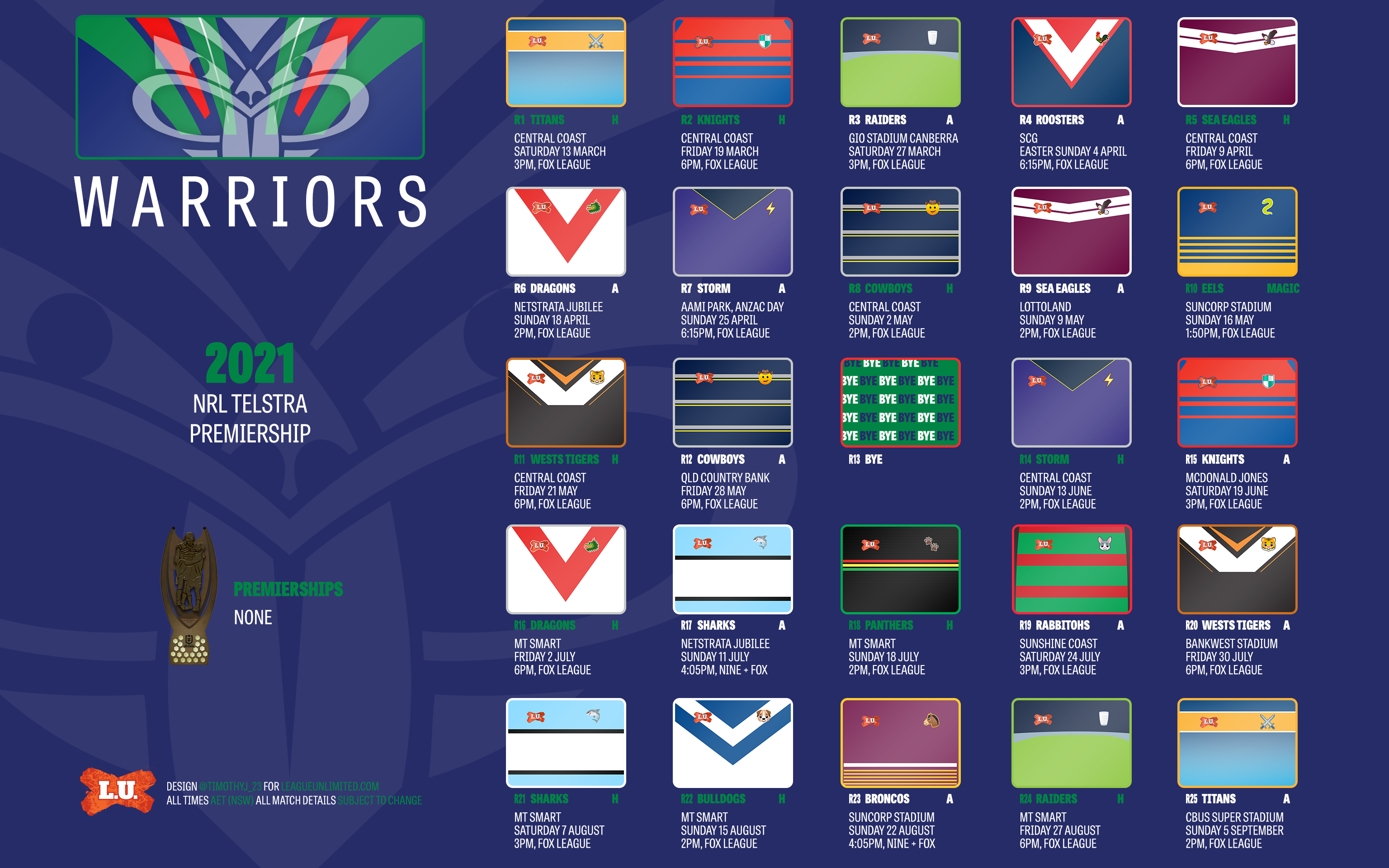 Tasked with the responsibility of directing play in the number seven jersey, the form of Chanel Harris-Tavita will have a major bearing on where the Warriors end up in 2021. Showing plenty of talent in limited game time over the past two seasons, the 21-year-old Samoan international will be looking to build on his combination alongside Kodi Nikorima in an effort to take the Auckland outfit back to the finals for the first time since 2018.

Making one appearance midway through last season, 20-year-old playmaker Paul Turner will be pushing for regular game time in the top grade. Showing touches of class as a starting halfback, the Whangarei product looms as a utility option thanks to his footwork and support play.