While the Roosters made the top 4 in 2020 and in doing so qualified for their 4th straight finals series, the boys from the East will be nowhere near satisfied with the final outcome and will look to reach the peaks of yesteryear once more in 2021.

The Roosters are a fascinating team to consider on the eve of the new season, with the majority of pundits picking them to remain in the mix amongst the contenders but very few thinking they're capable of going all the way.

In many respects, this is fair enough. They are without an established halfback once again after releasing young Kyle Flanagan to the Bulldogs, while replacing him will be the even more raw Lachlan Lam, with gun teen Sam Walker waiting in the wings. Jake Friend also showed signs of decline in 2020.

However, the Roosters still boast arguably the best fullback and five-eighth in the comp in James Tedesco and Luke Keary respectively, and you can't count out the three-time premiership winning coach they have at the helm in Trent Robinson.

The Roosters have a great mix of experience and raw young talent heading into 2021 and last season showed glimpses of what they're capable of at their peak. Their backline is both reliable, with the Morris twins proving age is no barrier on countless occasions, and dynamic, with Joseph Manu possessing the x-factor needed for the backline. Tedesco's track record speaks for itself and Tupou provides great value in terms of kick return metres in his own half and soaring through the air in the red zone.

What needs to improve big time if the tri-colours are to win it all is the defence. Over 6 games in the 2018 and 2019 finals series, the Roosters conceded just 42 points combined, while in their 2 finals outings in 2020 alone, they conceded 51. While this can partly be attributed to the ludicrous new rules that increase player fatigue, it is still nowhere near the calibre that it needs to be to go all the way.

However, Trent Robinson is well aware of this and will be doing everything in his power to bring back the famed Bondi wall renowned for turning opposition attacks away set after set. Angus Crichton looks set for longer minutes after the retirement of Mitch Aubusson and the concussion of Boyd Cordner, and has improved exponentially recently, being among the Roosters best in a recent trial match. Dynamic lock forward Victor Radley is set to return and provide the link in attack so desperately missed, while Sam Verrills will also relieve some of the pressure on Jake Friend.

In Rugby League, experience is just another way of saying someone is old, and in the case of the Roosters, there are a lot of old heads who are probably past their prime. The aforementioned Morris twins were good in 2020, but it'll prove quite the task to back it up in 2021. Jared Waerea-Hargreaves looked a shadow of his former self at times, while Jake Friends forward passes and nothing kicks became a weekly occurrence rather than an annual one. For better or for worse, the game is becoming much, much faster and it remains to be seen whether a team with a lot of players closer to retirement than debut can match it with some of the younger, more dynamic opposition.

Similarly, the Roosters are putting a lot of faith into young players with only a handful of first grade matches in key positions, most notably the five-eighth position with Robinson declaring Keary will wear the number 7 on his back. There is a plethora of options to partner Keary and I daresay we will see a number of them take the field at some point during the year. All signs indicate that Lachlan Lam will get the first crack, and probably deservedly so considering he has impressed in his limited opportunities so far. Breathing down his neck for the role will be Sam Walker and to a lesser extent Drew Hutchison and Adam Keighran. While all 4 options in 2021 are probably at worst serviceable first grade options and will most likely have their best years ahead of them, it is a lot to ask for someone like Lam or Walker to step in and immediately guide a team to the premiership.

The most successful club of the previous decade starts this season with a relatively light opening month, with the Rabbitohs their only opponent in the 2020 top eight over the first five rounds, before coming up against rivals Melbourne in Round 6.

With COVID restrictions still a big risk, the Roosters have already changed home venues for two games - their Round 5 clash with Cronulla has been moved from Gosford back to the SCG and the Round 12 trip to Perth has been canned, with that match against Canberra set to be played at Gosford instead.

The run home is a tough one - while Brisbane and St George Illawarra might be opportunities to grab a bag of competition points coming into the finals, the Panthers, Rabbitohs and Raiders will all provide much tougher opposition. 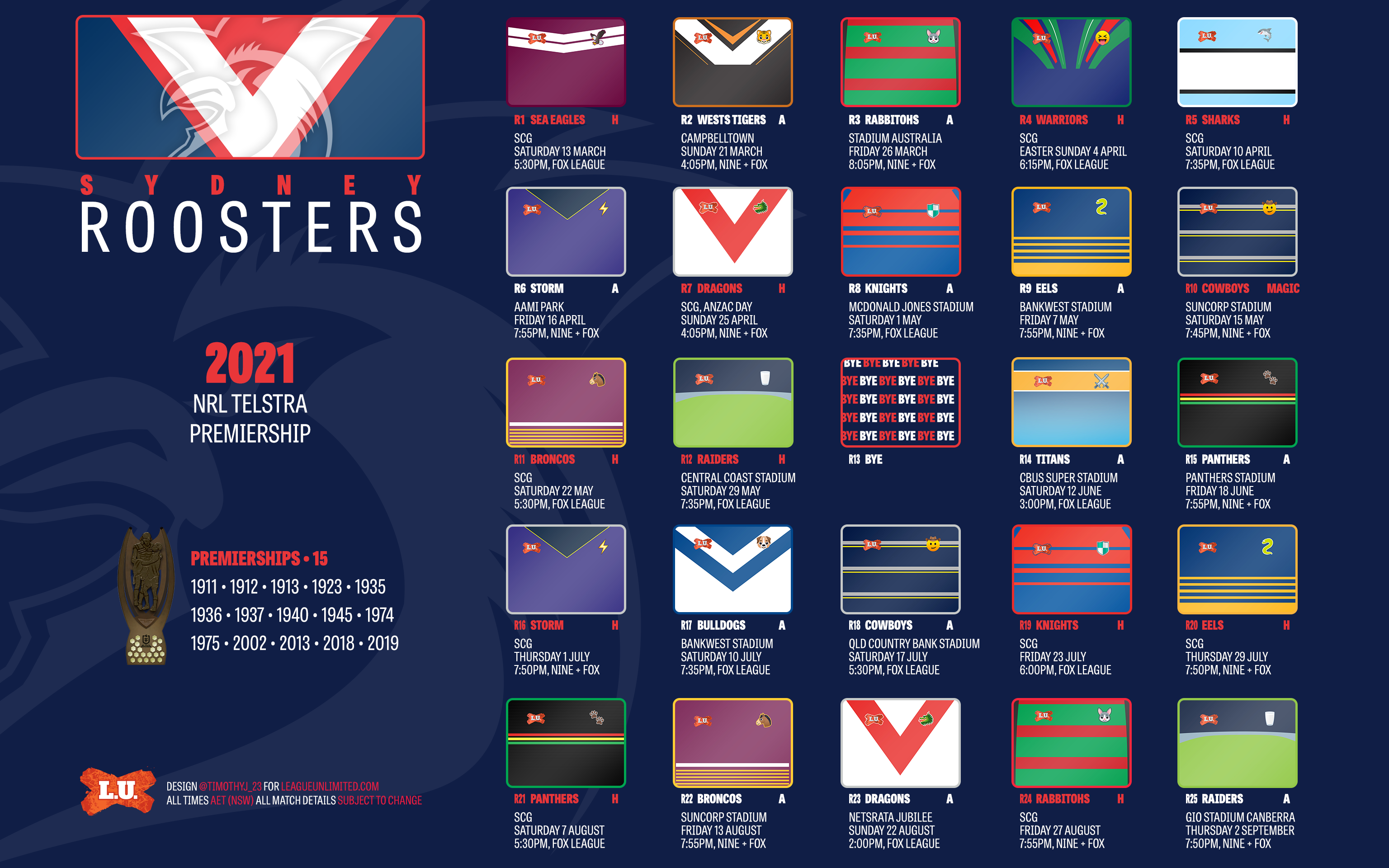 He's been already briefly mentioned in this piece so far, but it cannot be understated how much the Roosters missed Victor Radley in 2020. Their attack looked the clunkiest it's been in a long time and a lot of that can be put down to Radley's absence. He was pivotal in linking the big men with the outside backs and ensuring that the more dynamic men out wide could take full advantage whenever the forward pack got on a roll. He also didn't shy away from the tough stuff, averaging 131 metres and 32 tackles per game (not including against the Dragons where he got injured 7 minutes in). With Radley back and firing, the Roosters are likely to pose more of a threat with ball in hand, especially in opposition territory.

If Angus Crichton can cling on to the form he showed in the 2nd half of 2020, he may be worth a sneaky punt for Dally M back-rower of the year. With Boyd Cordner out for 12 weeks and possibly longer, Crichton will get the opportunity to play for an extended period on the left-hand side of the field, and although he himself prefers the right, he has looked more damaging when able to link up with Keary on the side that historically receives the most traffic when the Roosters attack.

In terms of external hype, it's not hard to argue that Joseph Suaalii will be the most heavily scrutinised player on the Roosters roster, however it is Sam Walker who I think is the most intriguing rookie to wear the Red, White and Blue in 2021.

Walker was signed by the Roosters back in 2019 as a 16-year-old with huge potential, however it is only recently that footy fans have gotten the chance to watch him on a decent platform, that being the recent trial against the Raiders.

It's fair to say that Walker gave Roosters fans a genuine reason to be excited, scoring 2 impressive tries that showed match awareness as well as having the confidence to throw 2 long cut-out passes on the same play. While it was only a trial match, he definitely showed himself to Trent Robinson as a genuine option to play first grade in 2021. Don't be surprised to see him get a call up at some point.