After winning just 3 matches in 2020, the only way is up for the Canterbury Bulldogs, with the once powerhouse club ushering in a new era.

The signing of new coach Trent Barrett has seen the well-connected coach secure a suite of up and coming players to complement the current roster in order to take the club forward in 2021. After a few seasons of despair, there is the sweet scent of optimism in the air down Belmore way.

2020 was simply rock bottom out for the Bulldogs, with their season becoming an epic disaster before a ball had been kicked. It commenced with the schoolgirl scandal in Port Macquarie leading to the sacking (and later re-instatement) of Jayden Okunbor, as well as Corey Harawira-Naera, who was later released to join the Raiders mid-season. The scandal provided a horrible platform with the Dogs starting the season dismally and it quickly turned into survival mode for under pressure coach Dean Pay who registered a stay of execution with their first win registered over the equally woeful Dragons on Easter Monday. It was all over for coach Pay however in Round 9 when the Dogs were dismantled by fellow cellar dwellers Brisbane as the club looked destined for their first Wooden Spoon since 2008.

Assistant coach Steve Georgallis took over for the rest of the season as the team tried their heart out most weeks, but simply did not have the talent on their roster to score enough points against the quality sides. It wasn't until the penultimate round that Canterbury put together a performance their patient and loyal fans had waited for, when they stunned the top 4 Rabbitohs outfit 26-16 (who themselves smashed reigning premiers the Roosters just days later), gifting last place on for-and-against to the Brisbane Broncos for the first time in that club's history.

With the ultimate insult of a Wooden Spoon avoided and with the diabolical decisions of the past - with back ended deals for former players to play at rival clubs finally lapsed - the club immediately set out to ensure future investments were wise ones. Barrett needed a major signing to get the ball rolling and he did so with Raiders and NSW outside back Nick Cotric. This saw a domino effect with promising forwards Corey Waddell and Jack Hetherington join the club, along with halfback prodigy and very hard done by Kyle Flanagan arriving from the Roosters. QLD Origin fullback Corey Allan then made the trip from Redfern to complete a refreshed and much stronger squad for 2021. Not only that, 2022 will see Panthers hot shot Matt Burton and premiership winner and Australian winger Josh Addo-Carr arrive in a huge show of faith that Canterbury are finally on the rise.

The Dogs recruitment has been the best in the NRL over the offseason. They can't score points, well they've recruited the 3rd best pointscorer of 2020 in Kyle Flanagan and added Origin level outside backs in Corey Allan and Nick Cotric. These keys additions further complement their already solid forward pack who kept them in the majority of their losses last year, with the Bulldogs losing just over half of their games by 8 points or less. The aggressive ‘Dogs of War' forward pack could return in a big way with the front row rotation of firebrands Dylan Napa and Jack Hetherington supporting English prop Luke Thompson who enters his first full season in Australia. On paper the Dogs are a bit of an unknown commodity with so many new recruits and therefore could just be the surprise packs that find their way back to finals football and beyond if things really click.

The Bulldogs haven't made the finals since 2016 and their problems aren't going to be solved in one fell swoop. The facts are that in 2020 they were second last for most tries conceded, second last for missed tackles and unsurprisingly second last on the ladder.

There are simply too many question marks over the relatively inexperienced coach Trent Barrett, whose tenure at Manly ended in poorly, Kyle Flanagan was rejected by the high flying Roosters after one year and now has to direct one of the cellar dwellers and how many suspensions will be shared between Thompson, Napa and Hetherington? Off the field the club have already found the off-season's biggest scandal, so it looks like the same old story and a battle to stay off the bottom of the ladder for the Doggies.

The Dogs have a fair test to start the season with a trip up the M1 to face the Knights in Round 1, followed by last year's runners up the Panthers. The opening month rounds out with a trip to Suncorp Stadium to face the Broncos followed by the annual Good Friday derby versus the Rabbitohs. With some local derbies against Parramatta and St George on the traditional Queen's Birthday Monday, Canterbury won't lack any motivation in the first half of the season. The biggest plus for the Bulldogs draw is that from Round 12, they will leave Sydney just once on the run home, where they only travel to New Zealand in Round 22 (and that is no guarantee) with a huge chunk of these games shared between their home grounds in Stadium Australia and Bankwest Stadium. So should Canterbury start well, then they have a huge opportunity to push for some wins in the backend of the season and compete for a Top 8 spot. 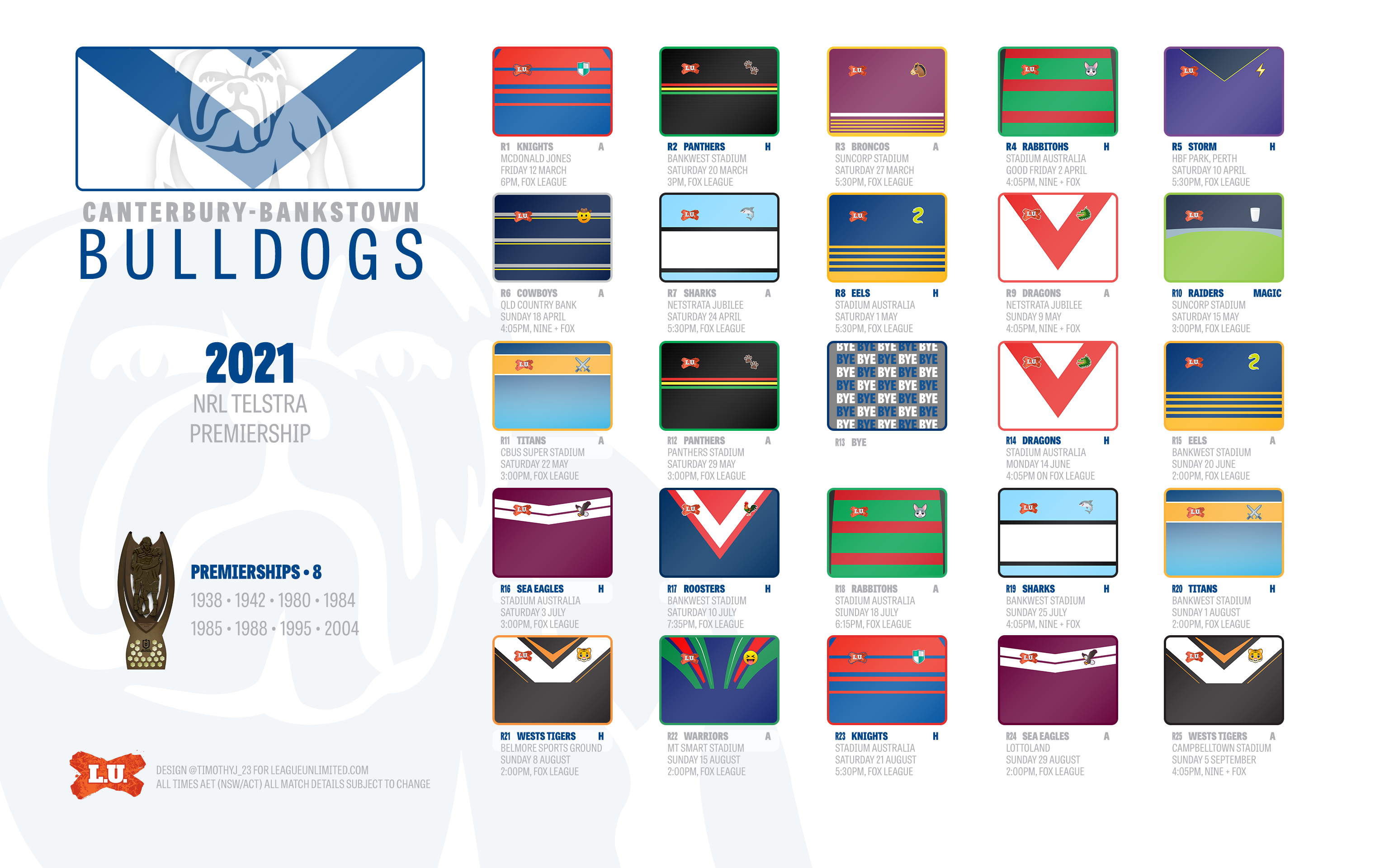 The two marquee signings for Canterbury in Kyle Flanagan and Nick Cotric automatically become the key players to the Bulldogs planned revival. Halfback Flanagan has been endorsed by Barrett as holding the keys to the side and how he responds from his much publicised public dumping by the Roosters is a fascinating prospect. The goalkicking playmaker has revealed that signing a three year deal with Canterbury provides him with the motivation to immediately repay his new coach for showing faith in his ability. Flanagan comes from working under the expertise of Trent Robinson and Cooper Cronk in the Roosters set up, into working with former NSW and Australian half Barrett, who had huge success with the Panthers halves in Nathan Cleary and Jerome Luai in 2020. Filling a constant in the number 7 jersey has coincided with the Dogs slide down the ladder in recent seasons and Flanagan can be the player to make the halfback position his own for years to come.

The left centre position has also been a revolving door since the departure of Josh Morris two seasons ago and having been a highly successful winger at the Raiders, Cotric now gets the chance to move closer to the ball and move back to a position that he excelled at in his junior career. Cotric was again a powerhouse for the Green machine in 2020, scoring 14 tries and once again only falling behind James Tedesco for most tackle busts (122) in the NRL. Scoring tries and threatening in attack is absolutely an area the Bulldogs needed to improve in and how Cotric adapts to the centres will be pivotal for their improvement in 2021. While Canterbury did pay a large fee to prise Cotric away from Canberra, he is still only 22 years old and no doubt his best football is yet to come.

The Bulldogs backrow will need to be on point throughout the season, as the Kennel has young pups Matt Doorey and Jackson Topine gunning for a run in the game day 17. 20 year old Doorey made his NRL debut in Round 14 against the Wests Tigers in an eye catching display, scoring a runaway try. Unfortunately for Doorey, he only played five more matches before a season ending PCL injury. Doorey has recently been promoted to the Top 30 squad for this year and will see some time in the top grade at some stage.

Jackson Topine has yet to make his NRL debut but was selected for the Maori All Stars and didn't let himself down. The Auckland born backrower is currently in the development squad for the side, but is already highly thought of at the club, taking out the Clubman of the Year in 2020 for his superb attitude and approach to being part of the squad. The 19 year old will look to keep improving and gain further experience in the Canterbury Cup during the early stages of the season but is a big chance to push for selection later in the season.