Yesterday full draw for the 2021 NRL Season was revealed, showing a return to 25 Rounds, with each team playing 24 games and having 1 bye.

As always, plenty of people have run their eye over their teams draw while some news outlets have decided to label a few teams has either having hard or soft draws.

Here we will look thoroughly at the draw for every club and determine just how hard it is for each team. 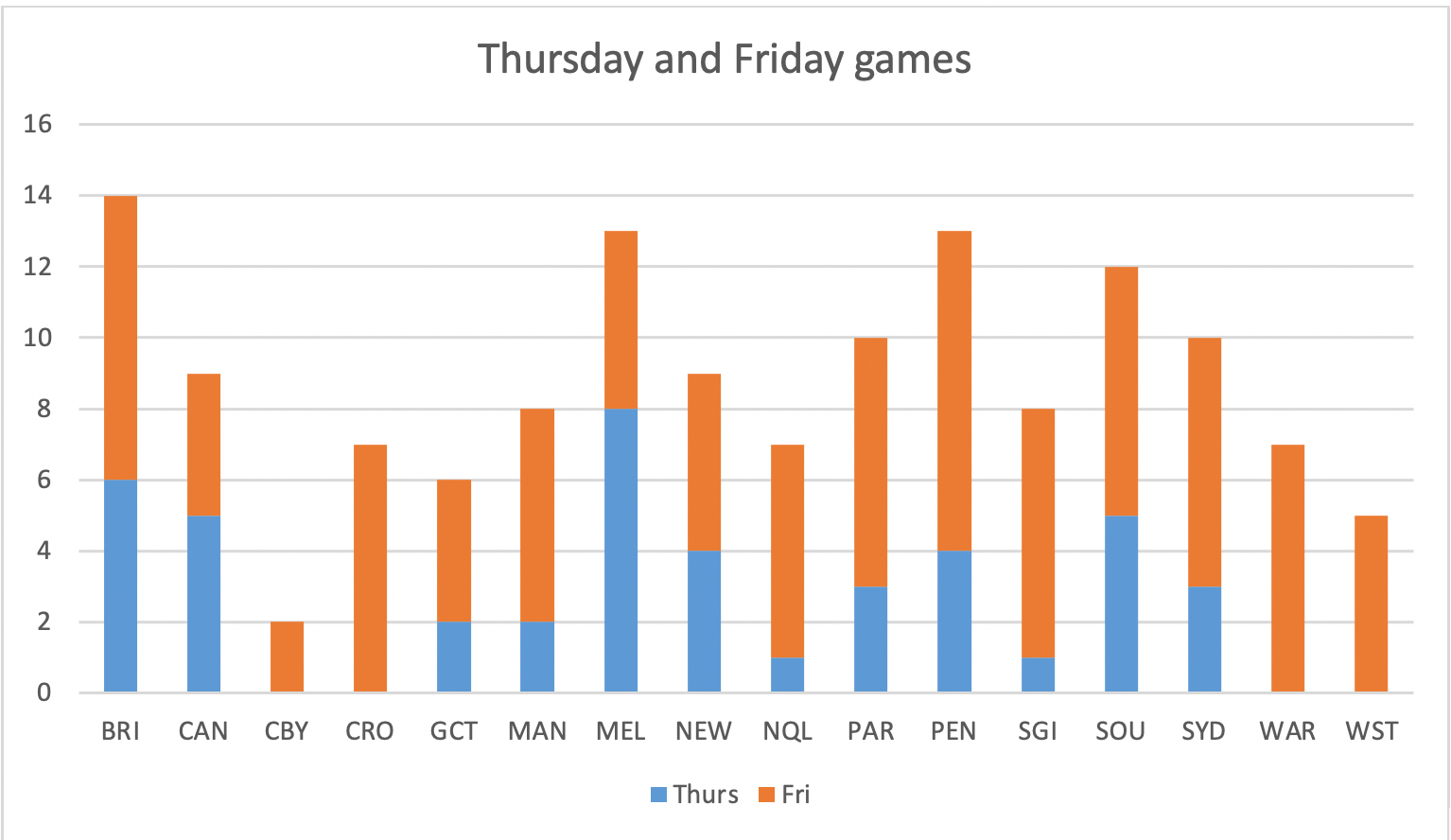 The Broncos have always dominated this timeslot, however they have come back to the field considerably. They still have 14 of their 24 games on these 2 days, or 58.33% of all their 2021 games. Melbourne and Penrith are just 1 game each behind with 13, with Souths on 12 rounding out the sides with at least 50% of their season played on Thursday and Friday.

Canberra will have 9 games across Thursday and Friday, more than in any of their previous seasons.

Melbourne will have 8 games on Thursday, 2 more than the Broncos, who have the next highest. Penrith will have 9 games on Friday, more than Brisbane on 8.

The Sharks, Warriors, Tigers and Bulldogs will not be seen on Thursday at all in 2021. The Tigers who for a while received more Thursday and Friday games than most clubs, will only have 5 games this year, with the Bulldogs receiving less, with just 2.

The much improved Titans will only snare 6 games in this timeslot and the Cowboys 7. Those two combined will still not have as many games on in these two days as the Broncos alone.

This is calculated purely on the ladder ranking of every team at the end of the 2020 NRL season. The Broncos clearly have the toughest ladder, as their combined opposition rank is 174, 17 points lower than the next toughest, which is the Bulldogs. The Storm rank third, with the Roosters and Raiders just behind. Souths, Manly, Parramatta, Wests Tigers and the Warriors are in the middle of the pack, with the Sharks and Dragons close behind. The weakest combined rank belongs to the Knights, comfortably clear of the Titans, Penrith and the Cowboys.

Bottom 8 sides Broncos, Titans, Dragons and Warriors will have to play the reigning Premiers Melbourne twice, as do the top 8 sides of Raiders, Sharks, Eels, Panthers and Roosters.

The Broncos, Sharks, Eels, Dragons and Roosters will play both Grand Finalists twice each, while there will also be two Grand Final rematches between the Storm and Panthers.

The total number of Days Turnaround for each side is reasonably similar, the least being 165 for the Raiders and the most is 170 for the Bulldogs and Souths. While the Raiders have less days turnaround than the other 15 NRL sides, the combined days turnaround for all their opponents in 2021 is just 146, the fewest (and equal with Souths).

Melbourne has the most number of 5 day turnarounds, with 4. That won't concern them given they have won all of their last 16 games with a 5 day turnaround, dating back to Round 13 in 2015.

Canberra and the Warriors have 3 five-day-turnarounds. This is the first time since 2011 that the Raiders have had so many short turnarounds, but they too have a strong record in recent times, winning 72.73% of the time since Round 18, 2012.

It's grim reading for the Warriors though, who have snared just 3 wins from 9 games since 2010 on a 5 day turnaround.

The Sharks, Bulldogs and Tigers are the only sides who won't have to back-up after 5 days.

This is about having at least a third of a sides games played with the same days turnaround. This stability allows a side to build a routine that can help immensely with preparation. 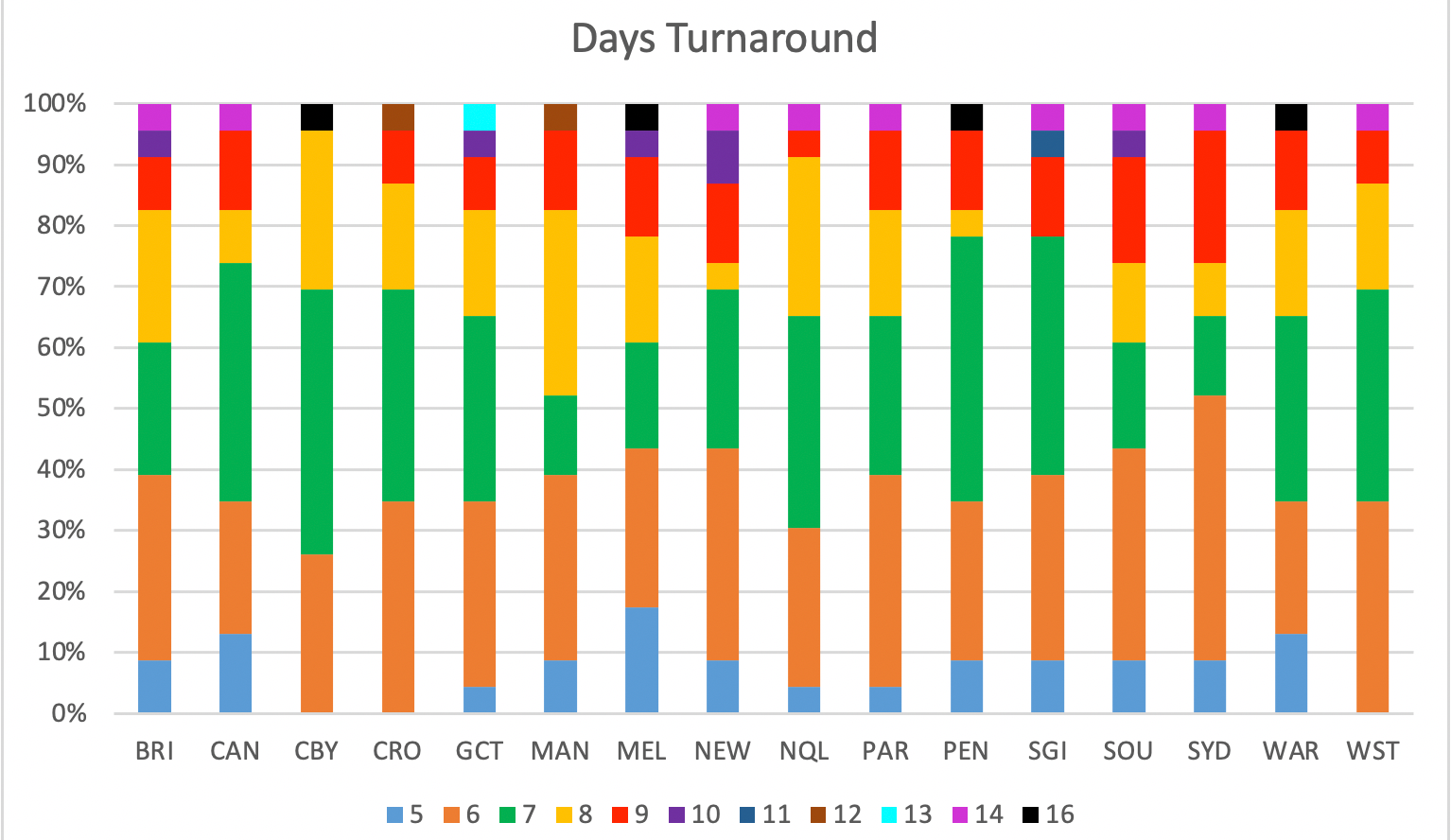 Souths, Parramatta, Cronulla, Wests Tigers and Newcastle all have 8 games with a 6 day turnaround.

After calculating all of this data, we now have a full ladder to show the teams in order from toughest draw to softest: