If ever a team epitomised the term ‘inconsistent', the 2020 Newcastle Knights would fit the description to a tee.

At times the Knights produced passages of attacking brilliance and a defensive fortitude to rival any team in the premiership.

On other occasions those moments of magic were interrupted by performances labelled as ‘embarrassing'.

Finishing the year in seventh position with 11 wins and a draw, the Knights qualified for their first finals appearance in seven years - a feat made all the more memorable given the dark days of three straight wooden spoons in the not-too-distant past.

Beginning the year in promising form with former Melbourne and Sydney assistant Adam O'Brien steering the side to second on the ladder after six rounds, an inability to perform week-to-week saw the side remain inside the top eight while gradually losing touch with the top four.

Finding some much-needed consistency midway through the year with wins over the Tigers (44-4), Sea Eagles (26-24) and Cowboys (12-0), a mounting injury toll saw the side's performances fluctuate to an extreme with results varying from 30-point losses to 20-point wins in the space of a week.

Squandering an opportunity to host a home final in the opening week of the play-offs with a dreadful showing against the Titans (6-36) in the last round of the home-and-away season, a sudden-death encounter with the Rabbitohs began promisingly only to end in a heavy 46-20 defeat.

Coming into 2021 with a largely similar roster and representative forward Tyson Frizell joining the ranks, the Knights will be hoping for better luck with injuries and greater consistency on the field. 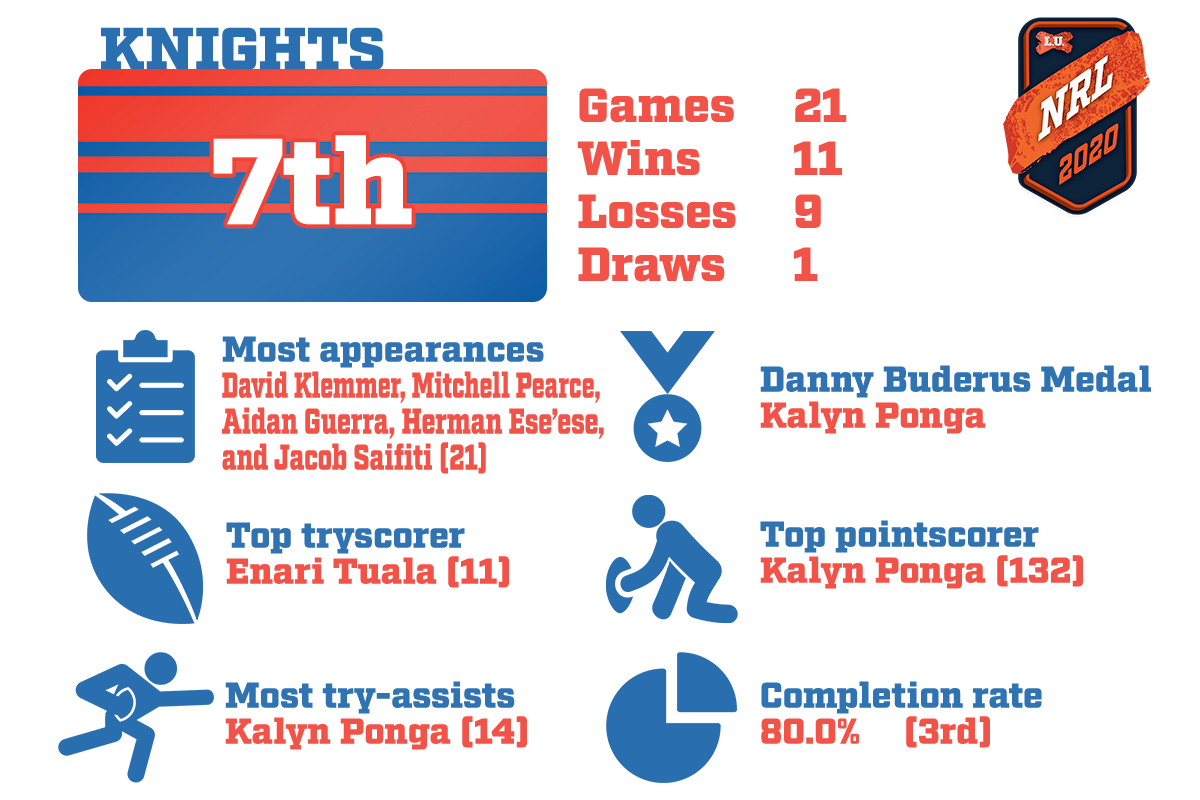 Already missing Jayden Brailey (ACL), Connor Watson (achilles) and Andrew McCullough (hamstring) to season-ending injuries, the impact of Blake Green tearing his ACL saw the side's performances go from one extreme to another over the closing rounds. Having struggled to put back-to-back results together during the first half of the season, the lack of experienced playmakers to support Mitchell Pearce saw the side appear clueless in defence against the Warriors (6-36), Roosters (12-42) and Titans (6-36), while bullying the Sharks (38-10) and Dragons (42-18) on home soil.

While the side's defensive resolve couldn't be sustained for the entire year, the Knights displayed a level of resilience that few teams in the league could match at times. Defying early injuries to Mitchell Pearce and Connor Watson to produce one of the most stirring performances in the club's history against Penrith (14-14), the side showed similar grit to hold off the Sea Eagles (14-12) at Lottoland for only the fourth time in 33 seasons.

When coming up against teams they were expected to beat, the Knights had a disturbing trend of taking their lowly opponents for granted. Suffering embarrassing losses against the Cowboys (20-32), Bulldogs (12-18) and Warriors (6-36) - all teams ranked below them on the ladder - the side saved their ‘best' collapse for last. Needing a win in the final round to guarantee a home elimination final in Newcastle, the side suffered a humiliating loss to the Titans (6-36) in a performance marred by accusations of racial vilification made by Mitchell Barnett towards Tyrone Peachey.

Enjoying his best season in the top grade after years of playing a ‘Mr Fix-It' role, Kurt Mann shone as a starting playmaker with six tries and eight try-assists. Spending a number of years sidelined with injury and living in the shadow of his twin brother, Jacob Saifiti emerged as a powerhouse prop by averaging over 100 metres and appearing in every match of the season. Joining the club over the off-season as a relative unknown after struggling to make a mark at North Queensland, Enari Tuala finished as the club's leading try-scorer (11) and played 20 out of 21 matches.

Having progressed through the local grades and junior pathways at Newcastle, Tex Hoy, Chris Randall and Brodie Jones debuted together during the legendary draw against Penrith in Round 3. Earmarked as a long-term playmaker by the club, Hoy went on to play nine matches in the top grade after an impressive showing in the pre-season Nines tournament. Earning a well-deserved shot at the NRL following years of toiling away in front of friends and family, Randall achieved a memorable feat during his seven appearances by setting the record for most tackles on debut (71). Coming off the bench on seven occasions as an impact forward, Jones stepped up in the absence of more established players sidelined through injury and suspension.

Set to benefit from the tougher defensive resolve provided by marquee signing Tyson Frizell, coach Adam O'Brien will need to settle on a permanent number six while reducing the gap between the side's best and worst performances.

Based on current signings, here is what I believe is their best lineup for next season: