Adam Huxtable dissects the Roosters' season after their failed bid to go three-in-a-row in 2020.

For the first time since 2017, the Sydney Roosters were not at ANZ Stadium on Grand Final day lifting up the Provan-Summons trophy. While a top 4 finish is obviously a good result for any club, the Eastern Suburbs boys will ultimately deem the campaign a failure and be looking to do everything they can to return to Rugby League's holy grail in 2021.

Going into 2020, the Roosters were backed by most pundits to achieve what no team has been able to do since 1983 - win 3 premierships in a row. The season got off to a shaky start before the COVID break, with Sydney being one of 6 teams to go 0 from 2.

If there was doubt, it quickly evaporated when the NRL resumed, with the Roosters winning 5 in a row - including a 59-0 demolition of the Broncos. The winning streak would be halted in Round 8, when the Roosters narrowly went down to the Storm in a modern-day classic at Suncorp Stadium.

From that point, it would be fair to say the Roosters never really looked like the same calibre outfit that saw them win back-to-back premierships. They went down to an injury-riddled Raiders side before only just sneaking past the Warriors, Titans and Dragons. Their return match against the Raiders in Canberra showed promising signs and in the following weeks they scored big wins over Newcastle and Cronulla. This was meant to be an incline into premiership success, however it ended up being the peak before a finals fade-out.

While they may have looked good against some lower-quality opponents towards the end of the season, the Roosters only won 1 match against another top 4 side out of 5 opportunities (including finals) on their way to a finals campaign that ended in consecutive weeks.  They also had to suffer through the pain of being completely and utterly embarrassment by bitter rivals South Sydney in the final round, turning in one of the most pathetic performances in the club's recent history to be on the wrong end of a 52-point drubbing.

The straight sets exit of the Roosters in the finals series is mostly indicative of their quality throughout the year. They appeared to lack confidence in rookie recruit Kyle Flanagan at halfback, with him being dropped for rounds 13 and 14 before a recall due to injury. There is no doubt the Roosters were a top 4 quality outfit, however based on their performances they were a long way off the premiership material we've seen in recent years. 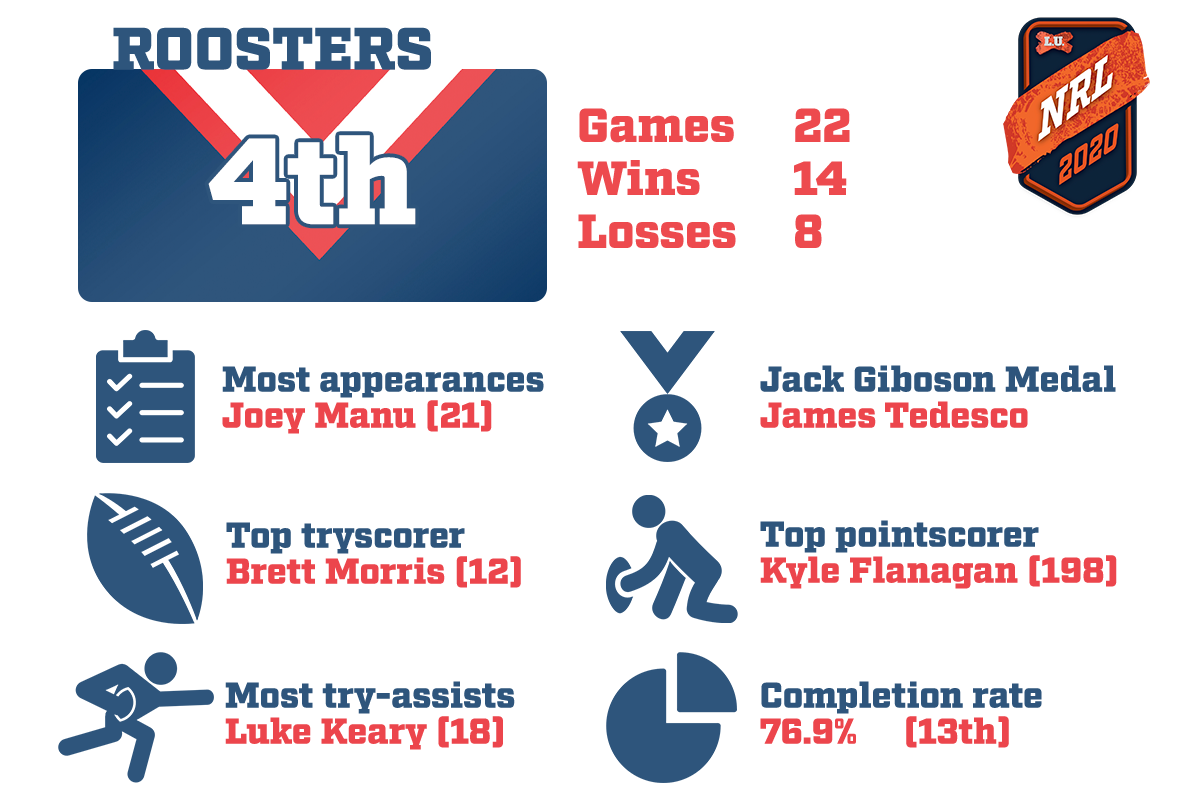 The spike of COVID-19 caused immeasurable loss to people all over the world, however it may have given the Roosters the reinvigoration necessary to get their title hopes back on track. While some may argue that the Roosters would've turned it around between rounds 2 and 3 if the break between was one week instead of ten, there is no doubt there was a noticeable rise in quality and intent from Sydney after the break.

In terms of negative turning points, it's hard to go past the night of the 26th of June. You may remember it as the game where both Victor Radley and Sam Verrills suffered ACL injuries within 20 minutes of each other. While the Roosters may have comfortably won the game, from that point on their attack wasn't as smooth due to Radley's absence as the linking man, while they also lost the refreshing spark Sam Verrills brought off the bench at dummy-half. I have no doubt that if that duo doesn't go down, season 2020 looks very different for the Roosters.

Despite their lacklustre end to the year, the Roosters were statistically the best attacking team throughout the regular season, scoring 15 more points than the Panthers, who came in 2nd. This is thanks largely due to the prowess of James Tedesco and Luke Keary, as well as the fact they played the Broncos twice, scoring 59 and 58 points in their two matches respectively. Josh Morris proved to be an astute mid-season purchase as well, scoring 11 tries from 17 starts in the Red, White and Blue.

While there weren't any glaring weaknesses in the 2020 Roosters side, there were definitely areas where some improvement wouldn't go astray. Jake Friend is simply no longer an 80-minute hooker at NRL level and Lachlan Lam is a stop-gap replacement dummy-half at best, however the return of Sam Verrills should fix this to a degree. The Roosters bench forwards can at times have a great impact, however more consistency was needed in their defensive efforts throughout the year, with the Roosters conceding 9 more points throughout their two 2020 finals games than the entire 2018 and 2019 finals series combined.

There were many shining lights for the Roosters, and while the usual suspects of James Tedesco and Luke Keary both had outstanding years, someone who improved and continues to improve was back rower Angus Crichton. At the start of his deal with the Roosters in 2019, Crichton experienced some indifferent form but started showing glimpses of his best towards the end of the year. Currently, it'd be hard to argue against him being in the top 5 second rowers in Rugby League, perhaps even higher. Crichton capped off the year with an outstanding performance filling in for Boyd Cordner at origin level and was, in my opinion, hard done by to not receive the Brad Fittler medal for best Blues player.

Having been around for a couple of years now and never really fulfilling his massive potential, Lindsay Collins took a huge step forward in 2020. His career was previously riddled with gaffes in trying to play the ball and defensive lapses close to the line, but he is currently a state of origin winner and one of the most impactful players in the comp. Hopefully he doesn't miss out on a premiership, as he is one of the very few players to win two preliminary finals without playing in a Grand Final. Sam Verrills looked like he belonged in first grade before injury ended his season, while young forward Daniel Suluka-Fifita was as good as you can be in 50 minutes across 4 games.

The Roosters haven't made too many roster changes and as a result, you can be assured that they'll be in and around the top 4 in 2021. There is a question mark over the halfback position, with incumbent Kyle Flanagan becoming a Bulldog during the off-season. The frontrunners are Lachlan Lam, who filled in a bit in 2020, Sam Walker, reportedly a prodigal talent yet to debut, and Adam Keighran, who has been given an opportunity to prove himself after impressing in limited stints for the Warriors. Question marks continue to surround Boyd Cordner's immediate playing future, with concussion threatening to end his career prematurely.