Andrew Ferguson looks at another year for the Wests Tigers where their top eight hopes were dashed, in the sixth NRL club review for 2020.

While 2020 was one of unheralded change, trials, tribulations and a ‘new normal' that reached far and wide - the Wests Tigers remained consistently middle of the road, albeit two spots shy of their traditional home in ninth place.

The side as always made a solid start to the season, then by the middle of the competition, they were in their typical situation of clinging onto a place in the top 8, before a miserable back end of the season saw them drop out of the 8.

Coach Michael Maguire continued to try different combinations but ultimately lacked the quality of cattle required to challenge the top sides. The evergreen Benji Marshall continued his brilliant attacking form of 2019 while the injection of Melbourne Storm rake Harry Grant made the side competitive at least.

Ultimately though, the side continues to follow in its own footsteps and it will be a surprise if 2021 isn't just a continuation of that form. 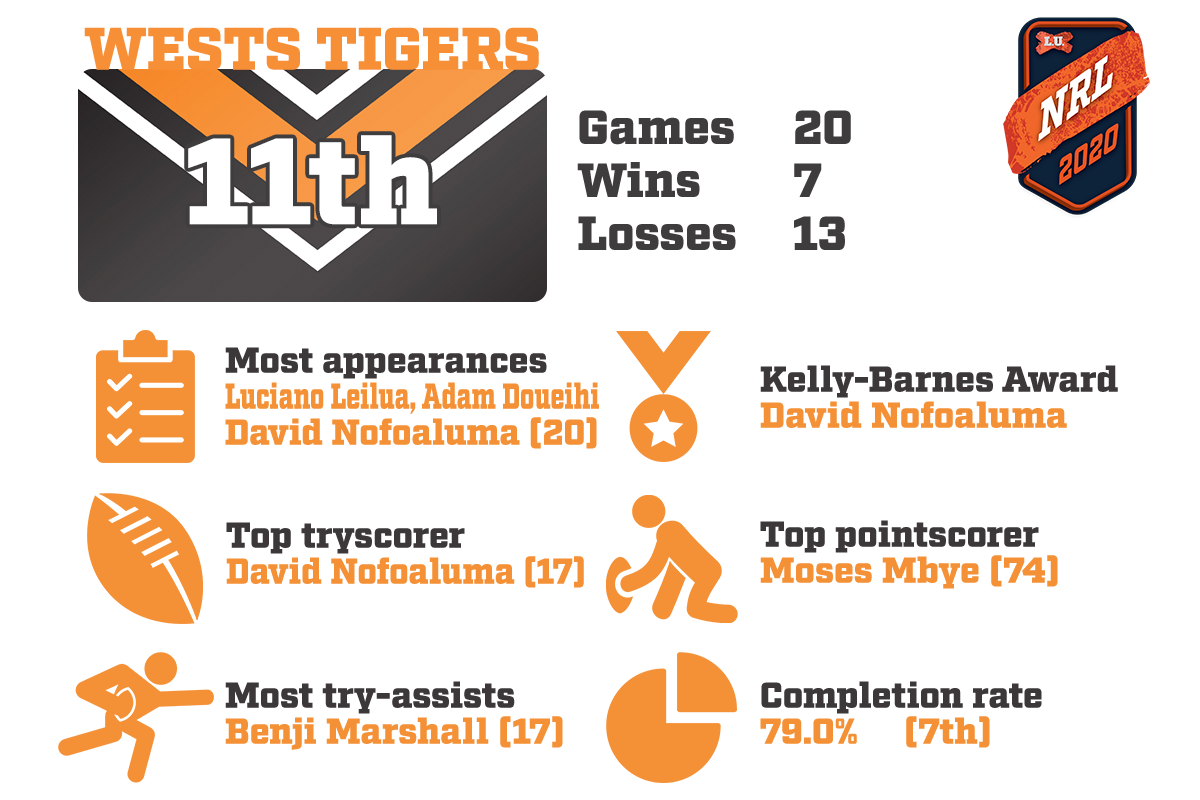 Round 10 - The Tigers came up against a struggling Broncos side, however the club has a long history of struggles against Brisbane, so a win was by no means guaranteed. So when the Tigers turned on an attacking blitz to win 48-0 and rise to 7th on the ladder, it was thought that maybe the club had turned a corner. However the side won just 2 of their last 10 games, a record that was better than only the last placed Brisbane and was as equally as bad as the next 3 worst sides in the competition in 2020 - Manly, North Queensland and the Bulldogs.

Attack - The Tigers were ranked 8th in attack, averaging an impressive 22 points per game. Benji Marshall and Harry Grant were brilliant and the addition of Luciano Leilua on the left edge proved to be a huge improvement to the teams attack as he terrorised teams every week.

Defence, again - The Tigers scored the unwanted record of becoming the first team in the competitions history to concede 26 points or more in 10 consecutive games - they all happened in their last ten games of the year. Only the bottom 4 teams had worse defence.

A tough one as there were 3 genuine stand outs. David Nofoaluma had arguably his best ever season and very nearly took out the top tryscorer award for the year. Luciano Leilua came to the club with very little fanfare but very quickly became a fan favourite with his powerful displays on the edge of the ruck. But it was Harry Grant that stood out, earning a place in the Queensland State of Origin squad. His attack was unique, multi-faceted and effective, while he was defensively solid all year and proved without a shadow of a doubt that he is not only NRL-ready, but he is a superstar.

The Wests Tigers saw 5 players make their NRL debut in 2020. Shawn Blore burst on the scene when he flattened Parramatta's Nathan Brown twice in consecutive tackles. Sam McIntyre made a big impression in his 12 appearances, so much so that he was poached by the Titans. Winger Asu Kepaoa had a nervous start but grew in confidence, eventually bagging 4 tries in his 5 starts. Reece Hoffman scored a try in his debut (and only game of the year) and has big raps on him. Alex Seyfarth made 4 appearances from the bench as part of the back row rotation and was solid.

The Tigers two best attacking players for 2020 will be gone for 2021, with Marshall not being offered an extension while Harry Grant's loan came to an end and he returns to the Melbourne Storm. The side has also lost Matt Eisenhuth, Robert Jennings and stalwart Chris Lawrence, on top of mid-season losses of Chris McQueen and Corey Thompson. The Tigers will get three-quarter Paul Momirovski back, while picking up the services of Panthers captain and front rower James Tamou as well as young Parramatta prop Stefano Utoikamanu.

The team desperately needs strike in attack and defence through the middle, a playmaker in the halves and a creative dummy half. Jacob Liddle returned from injury and thankfully finished the season healthy. The club is presently chasing wingers which seems odd given they debuted 2 during the year, have Nofoaluma in top form and Momirovski returning while losing just one winger in Jennings.

At the end of 2021 the club will have Joey Leilua, Jacob Liddle, Thomas Mikaele, Zane Musgrove, Nofoaluma, Russell Packer, Josh Reynolds and Billy Walters all off-contract, while Elijah Taylor looks set to be released this year, which will see the club free up a huge amount of cap space.

This might mean 2021 could well be more of the same for the club as they position themselves for a huge spending spree and a hugely different roster come 2022.