Justin Davies takes us through the last throes of Paul McGregor's tenure at the Dragons in the fifth of our 2020 NRL club reviews.

The long and drawn-out campaign is over - and no, we're not talking about the US election (that is still ongoing) - but the fight between Paul McGregor and Dragons supporters ended after the coach left his role in another wasted year from the joint venture.

For long stretches, the Dragons looked primed for their first spoon since becoming a joint venture but sporadic victories were enough to elevate them to the relative safety of 12th. That was helped by the back-to-back victories over Parramatta and eventual spooners Brisbane rounded off with a shootout against a second-string Melbourne side to give some hope headed into 2021

Starting out with four straight losses either side of the Covid-19 shutdown, the Dragons got themselves out of the starting blocks with back-to-back victories against Sharks and Titans. The joint venture didn't go much further with their failure to find a stable half pairing or regular points saw them on the end of huge losses highlighted by drubbings by finals bound Newcastle and Canberra.

2020 continued what has become a worrying trend with the Dragons have become insignificant in the context of being contenders in the NRL. It has been a downward spiral since 2010 and only three finals appearances since their win leaves them being left behind in the chase for another which won't please a hungry fanbase.

The rebuild has started in earnest for the Dragons headed into 2021 with Anthony Griffin taking charge of the side and putting his stamp on the side. Dragons fans are known to be impatient so Griffin will have to hit the ground running to avoid the ire of the faithful. 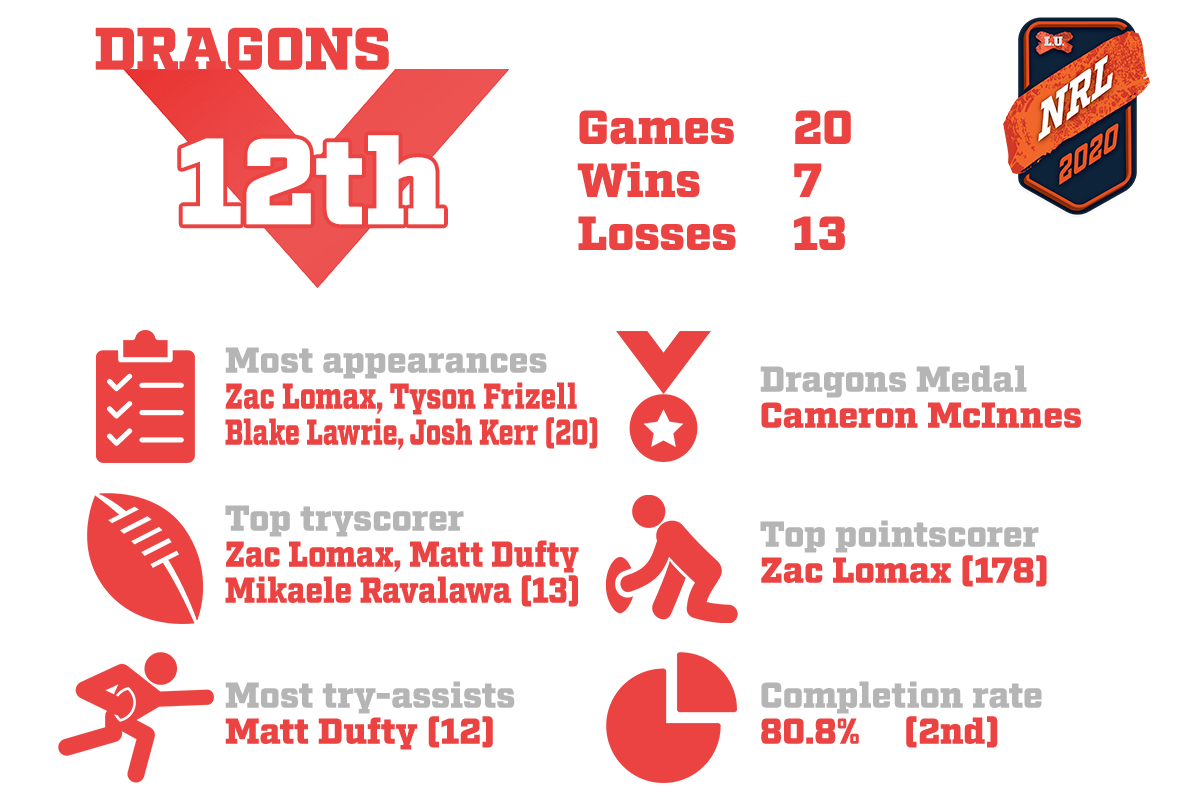 Tougher to pick than a broken nose for bright spots for the 12th-placed Dragons. The left-side combination of Mikaele Ravalawa, Zac Lomax and a sweeping Matt Dufty was lethal which showed in the trio scoring a majority of the Dragons tries in 2020. Otherwise, it was much of a sameness across the Dragons side which were flattered by their finishing position

The Dragons halves problems seem to be akin to unlocking the Da Vinci code. Ben Hunt, Corey Norman, Adam Clune and Jayden Sullivan all spent time in the spine for the battling joint venture and the attack was still remained anemic. Dragons only passed 30 points three times and their forward pack was bent back often. When push came to shove in many games, the Dragons wilted under fire (lol) and were beaten by 13+.

Almost by default this falls to the Dragons captain - Cam McInnes. The heart of the Dragons side played both hooker and lock this season without any fuss. In a side which struggled for motivation in 2020, McInnes tried to take the team forward and create for the side. Honourable mention to Mikaele Ravalawa who continues to improve on each year.

If there was a bright spot in 2020, it was the emergence of some young talent in the Dragons development system which has stalled in previous years. Adam Clune a mainstay of the NSW Cup team made a home in the halves for the second half of the season, showing a steady hand. Cody Ramsay scored with his first touch in the NRL and probably should've had a hat-trick while Jayden Sullivan gave a glimpse of the future in Round 26. Eddie Blacker who was thought to be a myth just to fill out the 21-man squad was a fan favourite in his cameo in the same game as Sullivan.

There is a new sheriff in town for the joint venture but it won't be the instant success that fans are craving in 2021. The halves continue to be a problem and Anthony Griffin will take next year to sort out his roster shown by the additions of Jack Bird and Poasa Faamausili the start of the transition which should see some improvement but not enough to make the top eight.