A disappointing band of battlers

In a year that shaped as make-or-break for one of the league's proudest clubs, the Canterbury-Bankstown Bulldogs went down the latter path.

Managing three wins from 20 matches, parting ways with coach Dean Pay mid-season and spending 12 weeks on the bottom of the premiership ladder, only a penultimate round victory saved the blue and whites from claiming the wooden spoon.

Coming into 2020 with expectations of improvement after finishing the previous year in winning form, the side's hopes went up in flames just days before the season opener after Corey Harawira-Naera and Jayden Okunbor were initially deregistered for breaching team standards during a pre-season trip to Port Macquarie.

Losing their opening two matches prior to the season suspension, a Queen's Birthday win against the Dragons (22-2) appeared to buy coach Dean Pay some time to save his job. Despite the initial respite, tension between rival factions of the board and a run of losses on the field - culminating in a dismal showing against the out-of-form Broncos (8-26) - saw the former premiership-winning front rower prematurely depart the club in July with a record of 19 wins from 57 matches.

Installing assistant Steve Georgallis for the remainder of the year in a move that opened up the side's attack by an additional try per game, upsets against the Knights (18-12) and Rabbitohs (26-16) served as fleeting moments of hope in a year marred by the side's inability to play for 80 minutes.

Heading into next season with a revamped roster and Trent Barrett at the helm as coach, the Bulldogs will be demanding immediate improvement after their longest absence from the finals in more than half a century. 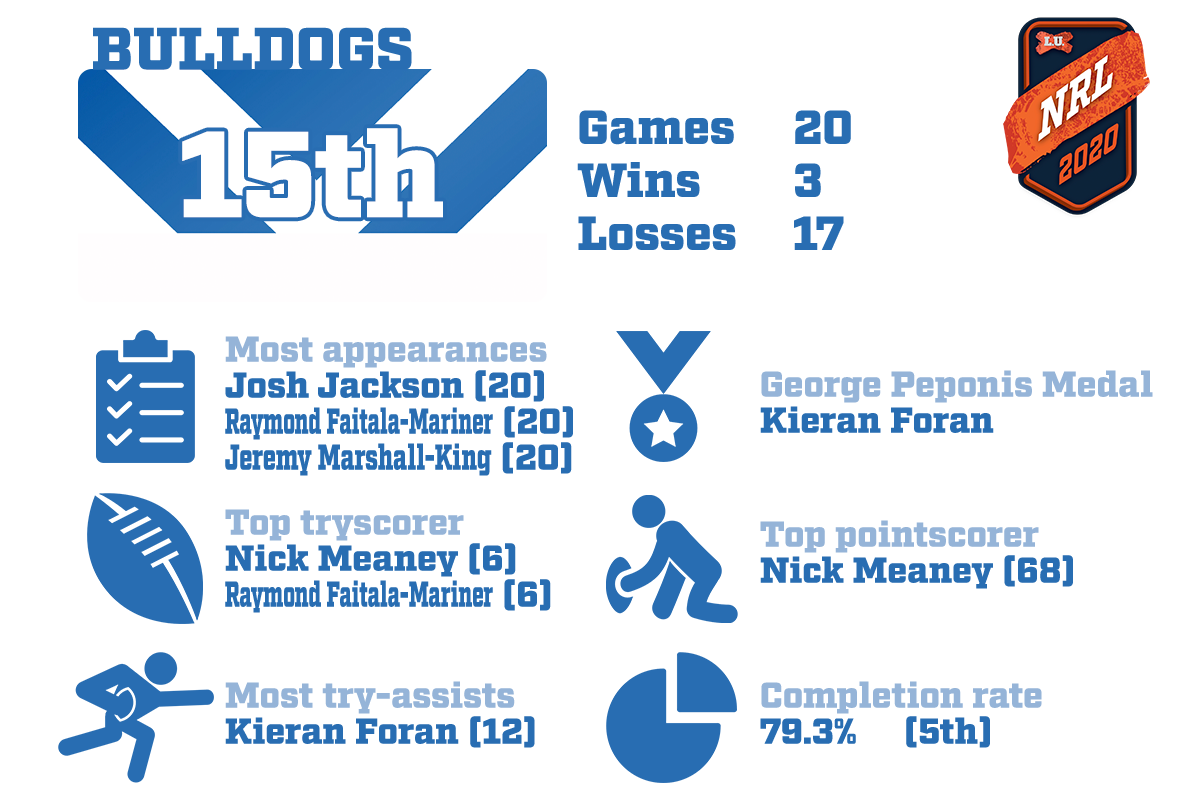 While the Bulldogs never fully recovered from the disruption of the Port Macquarie pre-season scandal, the side's performances following the COVID break confirmed 2020 as a lost cause. Offering little in attack and showing no signs of the defensive resolve that saw the side win seven of their final ten matches in 2019, pundits and supporters alike found it hard to fathom how off the pace the side appeared in their efforts against the Sea Eagles (6-32), Roosters (6-42) and Tigers (6-34).

For as often as the side finished on the wrong end of the scoreboard, the Bulldogs displayed a level of effort and desire that ensured they remained in the fight more often than not. Losing eight matches by eight points or less, the side's underwhelming roster demonstrated a willingness to rip in that was rarely sighted by the more experienced Broncos all year. Saving their best performance until the penultimate round of the season, the side capitalised on the Rabbitohs' complacency with an early lead before holding on to deservedly avoid the wooden spoon.

Using a rotating cast of three fullbacks and seven different combinations in the halves, the side struggled for cohesion and stability - ultimately impacting their ability to close out tight matches. With only three players appearing in all 20 matches throughout the season, the constant chopping and changing of personnel saw the side struggle to secure victory during the closing stages of matches; most notably in the final ten minutes against the Dragons (22-28) and Tigers (28-29) where the side snatched defeat from the jaws of victory.

Producing his finest season in the top grade to claim the Coaches Award at the presentation breakfast, second rower Raymond Faitala-Mariner appeared in all 20 matches and finished as joint leading try-scorer alongside Nick Meaney. Bringing up 200 NRL appearances for the club during the Round 19 win over the Rabbitohs, captain Josh Jackson furthered his standing as a club great by featuring in every match and producing wholehearted efforts each week.

Using 31 players in the top grade over the course of the season, Jake Averillo, Matt Doorey and Tui Katoa provided glimpses of promise to suggest better days lay ahead for the blue and whites. Playing 13 matches across the backline, halves and interchange, Averillo garnered plenty of plaudits after an impressive introduction in Round 2. Scoring a try just minutes into his debut in Round 14, second rower Doorey went on to play five matches for the club, while Katoa - brother of Cronulla speedster, Sione - earned his sole appearance in the final match of the year off the bench.

With a number of players moving on and a host of new faces making the move to Belmore, coach Trent Barrett will be out to make the most of his second chance by improving the side's attack and getting wins on the board early in the year. Based on current signings, their ideal lineup for 2021: