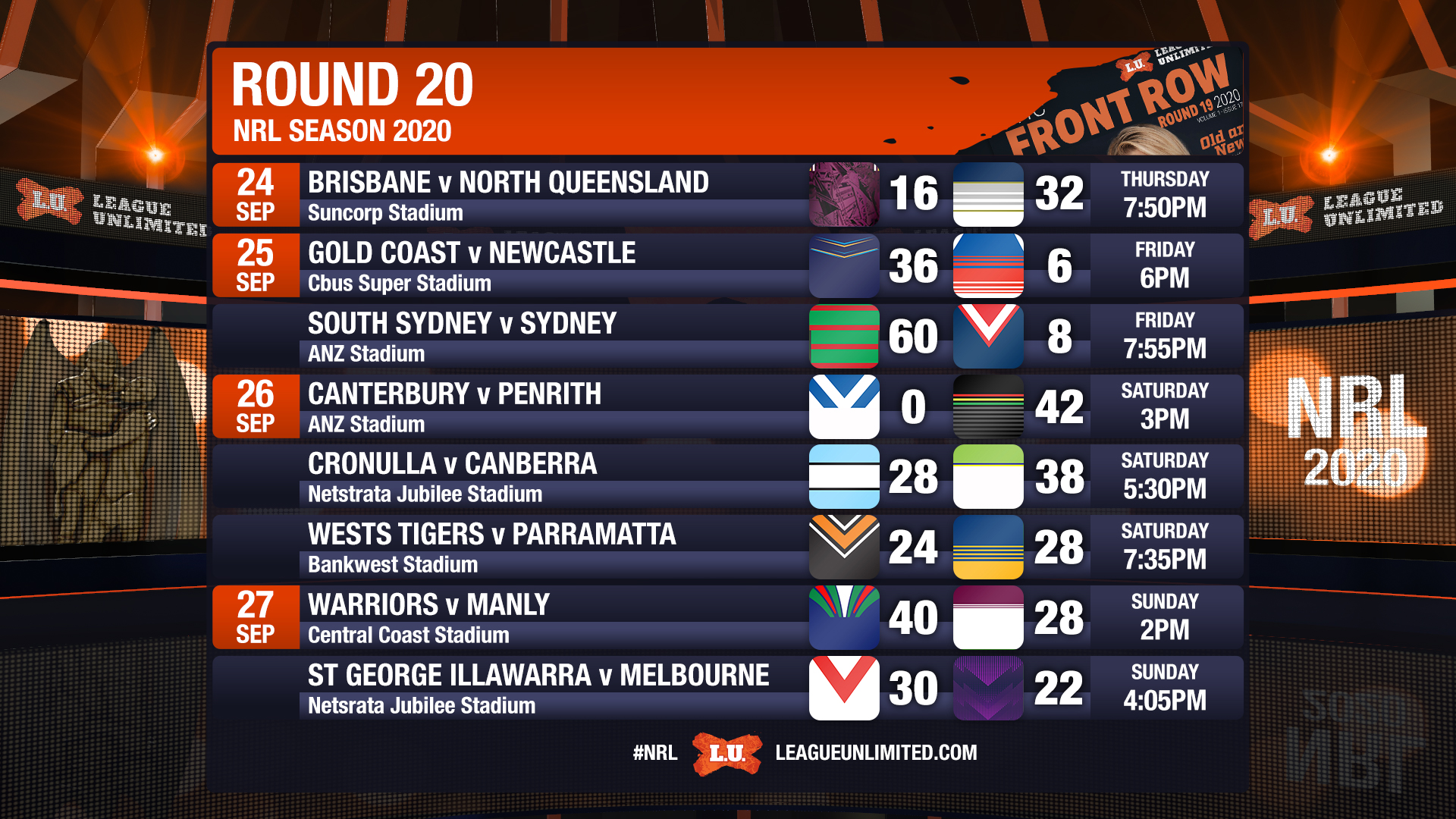 Monday's Expert is here - with the full results from NRL Round 20, along with Match Review charges, LeagueUnlimited.com Player of the Year leaderboard, injury news, crowd and TV ratings info.

All listed times are AEST (NSW/QLD/VIC/ACT).

Brisbane's Kotoni STAGGS left with a suspected ACL tear. Richie KENNAR also picked up a shoulder injury. Cowboys flyer Kyle FELDT is set to undergo off-season surgery which is likely to rob him of a Maroons debut in November.

Brisbane have claimed their first wooden spoon after 33 seasons. The Cowboys finish 14th.

The Knights are hoping to welcome back Lachlan FITZGIBBON from a groin injury in next week's elimination final.

Newcastle head to ANZ next Sunday for a sudden-death elimination final against the Rabbitohs. Titans finish with 5 straight wins and lock down 9th spot.

Co-captain Jake FRIEND missed 77 minutes of Friday's mammoth loss to Souths after getting concussed. He will need to pass concussion protocols to lace up on Friday. Sitili TUPOUNIUA will need to do the same.

The Roosters slide to fourth and will head to Penrith on Friday night. South Sydney host Newcastle in an elimination final on Sunday at ANZ Stadium.

Canterbury winger Jayden OKUNBOR has a painful off-season ahead after rupturing his ACL in the match. Penrith will welcome back rested trio Dylan EDWARDS, Viliame KIKAU and Stephen CRICHTON for Friday's game. Centre Brian TO'O limped off late with an ankle injury but didn't need scans and should play Friday.

Canterbury avoid the spoon but wouldn't have enjoyed such a thumping to finish proceedings. Penrith host the Roosters in a qualifying final on Friday at Panthers Stadium.

Canberra prop Ryan SUTTON succumbed to a knee injury in the clash and will miss most of the finals series. The Raiders will welcome back seven other players who were left out of this game. Cronulla will look to welcome back Siosifa Talakai, Josh Dugan, Sione Katoa and Chad Townsend.

These teams meet again in an elimination final on Saturday in Canberra.

Both Marata NIUKORE and Dylan BROWN could be available for next weekend's first weekend of finals. Outgoing Tiger Benji MARSHALL sustained an MCL injury and missed most of the clash.

Parramatta secured a double chance and will head to Brisbane to face Melbourne. The Tigers finish 11th.

The Warriors will now head home and count the cost of their incredible sacrifices. Manly's long injury list is headlined by Tom TRBOJEVIC who didn't play this weekend and is aiming to be right for Origin I on November 4.

Neither side is featuring in finals. The Warriors' win propelled them to 10th with the Sea Eagles slipping to 13th on account of the Dragons' win later the same afternoon.

Melbourne rested a million players and the resulting returns will give coach Craig Bellamy an embrarassment of riches. The only concern from today was Tui KAMIKAMICA leaving the field in the first half with an injury.

Melbourne host the Eels in Brisbane next Saturday. The Dragons end in 12th.

LeagueUnlimited Player of the Year standings

At the conclusion of each match our reporters will choose their best three players from the match. You can views those points in each match in their respective match reports. Each week we'll update the leaderboard right here in Monday's Expert.

Each week we'll also do our best to keep you across the crowd figures and TV ratings which are often the most talked-about parts of the game.

Crowd figures can be found above in the match results section where available.