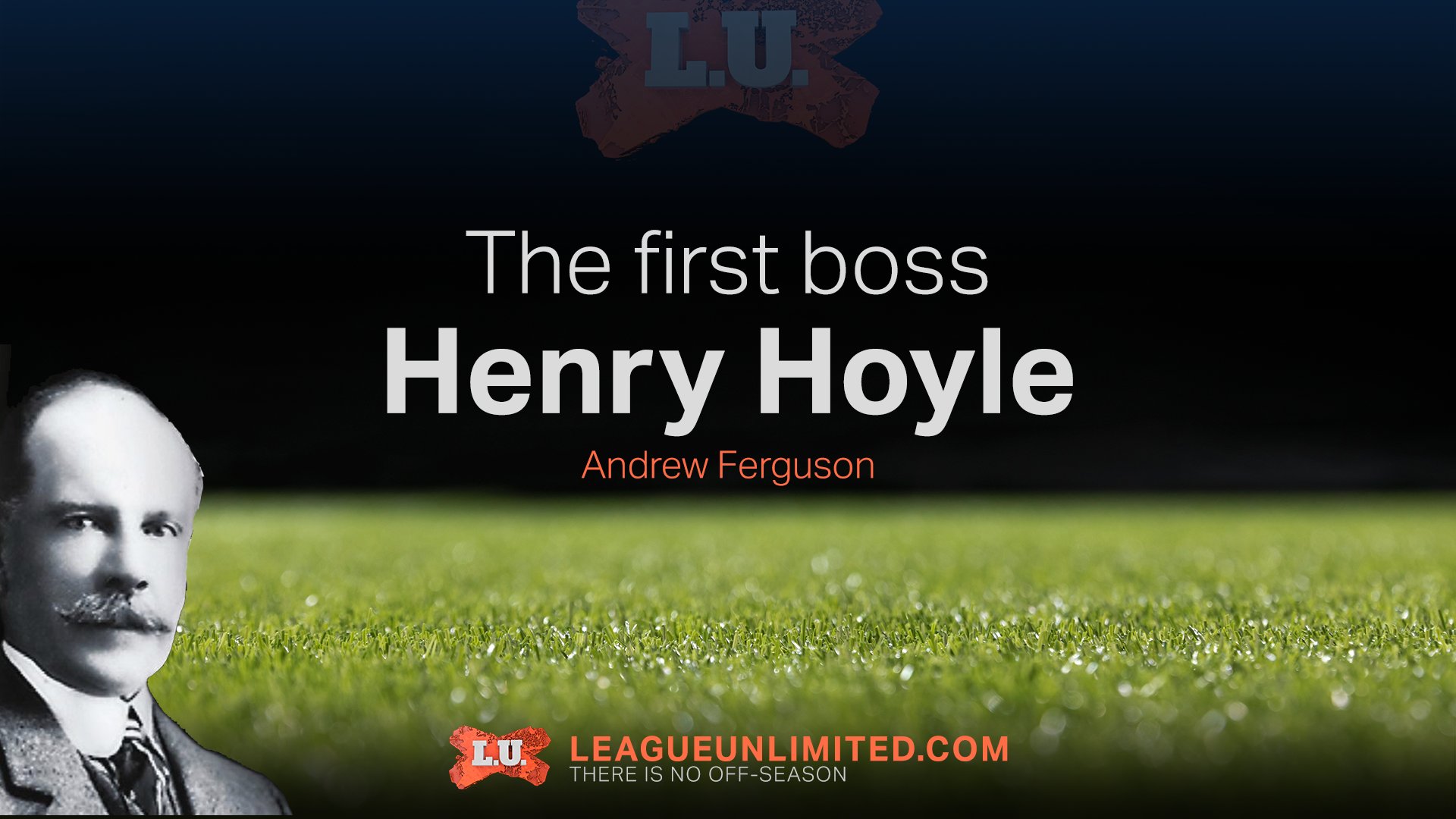 Henry Clement Hoyle's entire life read as the perfect plan for a man to become a senior member of the Australian Labor Party and as the first presidents of the game for the working class man, Rugby League.

He was born on November 20, 1852 in Millers Point and attended a convent in Balmain before transferring to the Fort Street Public School. Aged just 10, Hoyle entered the workforce, taking on light duties at a local sawmill before becoming an apprentice blacksmith at P N Russell & Co. In 1868 aged just 16, like many other his age at the time, began working on the docks in Balmain.

When he was 24 he joined the Railways Department and within a few brief years became a foreman. His passion for equality and fairness for all men saw him rise to a position of authority and as the spokesmen for his fellow co-workers. He was the key activist in the iron trade strike of 1882 that sought to obtain a better wage for all employees. Hoyle took a hard-line stance as he believed that his co-workers had earnt and deserved a significantly better salary. Even when the employer offered packages to senior staff to get them to cease strike action, Hoyle refused the offer. This strike lead to him founding and becoming the inaugural president of the Eight-Hours Conference. In 1885 Hoyle founded and became the inaugural president of the Railway and Tramway Association.

In 1877, shortly after he joined the railways, Hoyle married Maria Dillion and soon after, they moved into their first home in Surry Hills. They had 7 children born between 1878 and 1895 - Mary, Clement, Myra, Ida, Gladys, Leo and Clifford.

In 1890, the Railway Commissioners issued Hoyle an ultimatum: to surrender his role as President of the Eight-Hours Union or be relieved of his duties as President of the Railway and Tramway Association. Hoyle was given 24 hours to do as requested, but he refused and was subsequently sacked. He quickly set up his own real estate auctioneering business in Darling Harbour.

Hoyle remained with the Protectionists until losing his seat at the 1894 election. He then began writing for the Freemans Journal, an Irish Catholic publication.

During 1907, there was a growing discontent within Rugby Union player ranks in Australia, leading to a semi-revolt which saw some players keen to create their own competition based on the Northern Union game being played in England. Test Cricketer Victor Trumper, entrepreneur James Giltinan and Hoyle regularly met for discussions with some disgruntled players at Trumper's sports store. These talks inevitably lead to a mass player revolt by the players, who took an enormous risk to create a breakaway competition.

On August 8, 1907 at Bateman's Crystal Hotel, Hoyle was elected as the inaugural president of the NSWRL, alongside Giltinan (secretary) and Trumper (treasurer). The trio helped finance the birth of Rugby League in Australia.

A week after the NSWRL was formed, Hoyle, Trumper and Giltinan hastily organised 3 matches between the New Zealand team en-route to England, known as the All Golds, and the best of the players in NSW who had decided to jump codes. The NSW team lost all three games in close contests, which were played in the space of a week. These three matches though served as a great promotion for the new game.

Hoyle made two hurried trips to Newcastle just weeks before the scheduled start of the inaugural 1908 season, upon learning that a Mr Chambers of Newcastle was interested in having a team compete in the Rugby League. Giltinan urged Hoyle to get Newcastle in the competition so as to avoid having byes, as they only had 7 teams ready for kick off at the time (Balmain, Easts, Glebe, Newtown, Norths, Souths and Wests). Hoyle persuaded the Newcastle men to join the competition by revealing there would be a team of players representing Australia to be sent to tour England by seasons end. Newcastle quickly joined the Rugby League soon after.

And Rugby League was born.

At the end of the 1908 season, the NSWRL had a debt of £500. A Kangaroo tour to England was proposed to make enough money to make a profit after the debt had been cleared. The tour was bankrolled by Giltinan and Arthur Rofe (who provided £2000). Shortly after the tour begun, it was cruelled by abysmal weather and workers strikes in Northern England. This affected gate takings and meant by tours end, Giltinan had run at a loss, the NSWRL debt remained outstanding and the Northern Union in England had to pay for return tickets for many of the Australian players. Giltinan managed to repay Rofe £1545, but was eventually taken to court by Rofe who sought to recoup the remaining £455. A protracted case dragged on throughout 1914, which eventually ruled Giltinan had to repay the monies. The decision eventually led to Giltinan declaring bankruptcy.

On March 5 1909, Hoyle was initially re-elected as NSWRL President before angrily resigning just ten days later over allegations of mismanagement and vote -rigging. On the same day, Trumper was sacked along with Giltinan, who was en-route to Australia after the Kangaroo tour amid allegations made by club board members surrounding a secret bank account that was set up by Trumper, Giltinan and Hoyle. The Bulletin newspaper explained that sums of money were banked into a trust account to help pay marquee players and to generate further interest in the game "by secret but not dishonourable means." Hoyle, Giltinan and Trumper were really only guilty of poor bookkeeping.

Hoyle returned to politics in 1910, joining the Labor party to pick up a surprising win for the seat of Surry Hills over the very popular Sir James Graham. He won the seat for a second term in 1913, becoming the Member for Railways and Mines. It wasn't long before he climbed the ranks to become a senior minister and assistant treasurer. He was involved in a lot of key policies, the most prominent at the time was the prevention of smoking in train carriages occupied by children.

Hoyle had also seemingly been forgiven by the NSWRL and returned to become president of South Sydney in 1913.

The breakout of war led to many heated discussions in parliament about conscription. Hoyle's leader and Prime Minister Billy Hughes was adamant that conscription should be enforced, a stance that Hoyle sided with, as did the NSWRL Secretary and Labor politician at the time Edward Larkin, but he was defeated in two referendums.

In 1916, Hoyle's youngest son Clifford joined the Australian Imperial Forces. On his first day of battle he lost a finger in battle. A few months later Cliff was sent back home after he was found guilty of absenteeism, when he left camp for ten days.

In 1917 Henry Hoyle resigned from the Labor party, returning to Vaucluse and reviving his auctioneering business, which he ran up until his death on July 20, 1926.

His funeral was attended by a large gathering of politicians and former colleagues. One notable omission though was Giltinan.

Horrie Miller was the only attendee to represent Rugby League.

Hoyle died as a life member of the NSWRL, a trustee of Taronga Park Zoo, a pioneer in the Unions, the Labor party and Rugby League.