Three-peat, Three-peat, Three-peat will be the continuous theme for the Roosters in 2020, after the Tri-colours did what many deemed impossible in the modern game to become the first team to win back to back premierships since the legendary Broncos sides of the 1990's.

The Roosters were always the team to beat in 2019, as they cruised through the regular season to finish in 2nd place behind an ultra-consistent Melbourne Storm on the NRL ladder. However once they crossed the white line in the finals, the Roosters took it up a notch when it counted, thrashing bitter rivals the Rabbitohs in Week 1 by 30-6 and then fresh off the week off, they were clinical in defeating the Minor Premiers the Storm 14-6, to put them in the box seat to defend their title.

With a team choc full of superstars from Internationals James Tedesco to Latrell Mitchell to the halves combination of Cooper Cronk and Luke Keary the Chooks had the fire power in the backline. To complement their attacking arsenal, they boasted the engine room of Kiwi enforcer Jared Waerea-Hargreaves, NSW and Kangaroos skipper Boyd Cordner and emerging star Victor Radley to get them on the front foot. With these elements combining the Roosters looked an unstoppable football side.

There was however, the 72 minutes of the NRL Grand Final where they looked destined to fall to the giant killing Raiders and despite the now famous ‘six again' call, the Roosters still had the class to snatch the win with the big match experience in their backline managing to excel when it mattered. While the Raiders had multiple opportunities to get the win, the Roosters had seemingly one, with departing centre Mitchell creating space for his outside man in winger Daniel Tupou who found James Tedesco who was the hero yet again at the precise moment he was needed to seal victory.

After their win in the World Club Challenge against St Helens to again become the undisputed champions in the world of rugby league, the Roosters look to be rejuvenating yet again and look destined to be at least a Top 4 side by the end of the season.

Trent Robinson is now in the conversation as one of the greatest coaches of the modern era, after winning 3 premierships he joins the elite company of names such as Bennett, Gibson, Sheens and Bellamy who have 3 or more titles. Since joining the club in 2013, Robinson has built a phenomenally consistent record from the Roosters coaching box, leading them to Minor Premierships in 2014, 2015 and 2018 to ensure they are regularly in the Top 4 and in the conversation as contenders year after year. While the Roosters have no doubt lost some key personnel in 2020, while Robinson is at the helm there will be no lack in hunger or desire for his side to create history.

While the Roosters attack is first class and lead all the statistics in tries scored, points scored and most metres gained from their 2019 campaign, it is their defence, particularly at finals time, that have set the Roosters apart from the rest. In 2019, they were an impenetrable force, only letting in an incredible 3 tries from 3 finals matches, which included an incredible final 20 minutes of the Grand Final where they denied Canberra time after time, while being camped on their own line. They again enter 2020 with a squad stacked with representative players and a side with vastly more Grand Final and Finals experience than any other team.  While there is a team with such strike power all over the park complemented with a defensive resolve to match, the Roosters are in the box seat to make it a historic three premierships in a row and go down as one of the greatest sides of all time.

No team has completed the Three-peat since the invincible Parramatta Eels (1981-83) and they did so with their maestro halfback Peter Sterling playing in all 3 premierships. The Roosters lose their conductor and Grand Final specialist in Cooper Cronk this time around and given Cronk has won 4 premierships this will prove too big a hole for Sharks recruit Kyle Flanagan to replicate.

Throw in the high profile loss of Latrell Mitchell, who many forget triggered the winning play in the 2019 Grand Final win, and it is impossible that the Roosters can be as good as they were last year. They have simply peaked and they will need their rivals not to improve to win it for a 3rd consecutive time.

The Roosters kick off the season with a trip to Penrith in Round 1 and besides a quick trip up the M1 to Gosford in Round 2 vs Manly, the Tri-Colours will stay in Sydney for the first 5 weeks of the season. Round 6 sees the side travel across the ditch to play the Warriors, before they play the Dragons at the SCG in the annual Anzac Day match. Following Magic Round in Round 8, the defending premiers face the Storm and Knights at home, before the Grand Final re-match in Perth against Canberra.

Over the representative period, they face a tough road trip to North Queensland and again face the Raiders in chilly Canberra in Round 15. Round 16, sees the Roosters play at the picturesque North Sydney Oval vs Warriors which kicks starts 6 straight games in Sydney. Round 22 and 23 see back to back games against bitter rivals in Melbourne and South Sydney in a fine tune warm up for finals, before closing out the regular season with a Friday night blockbuster against the Broncos at Suncorp Stadium. 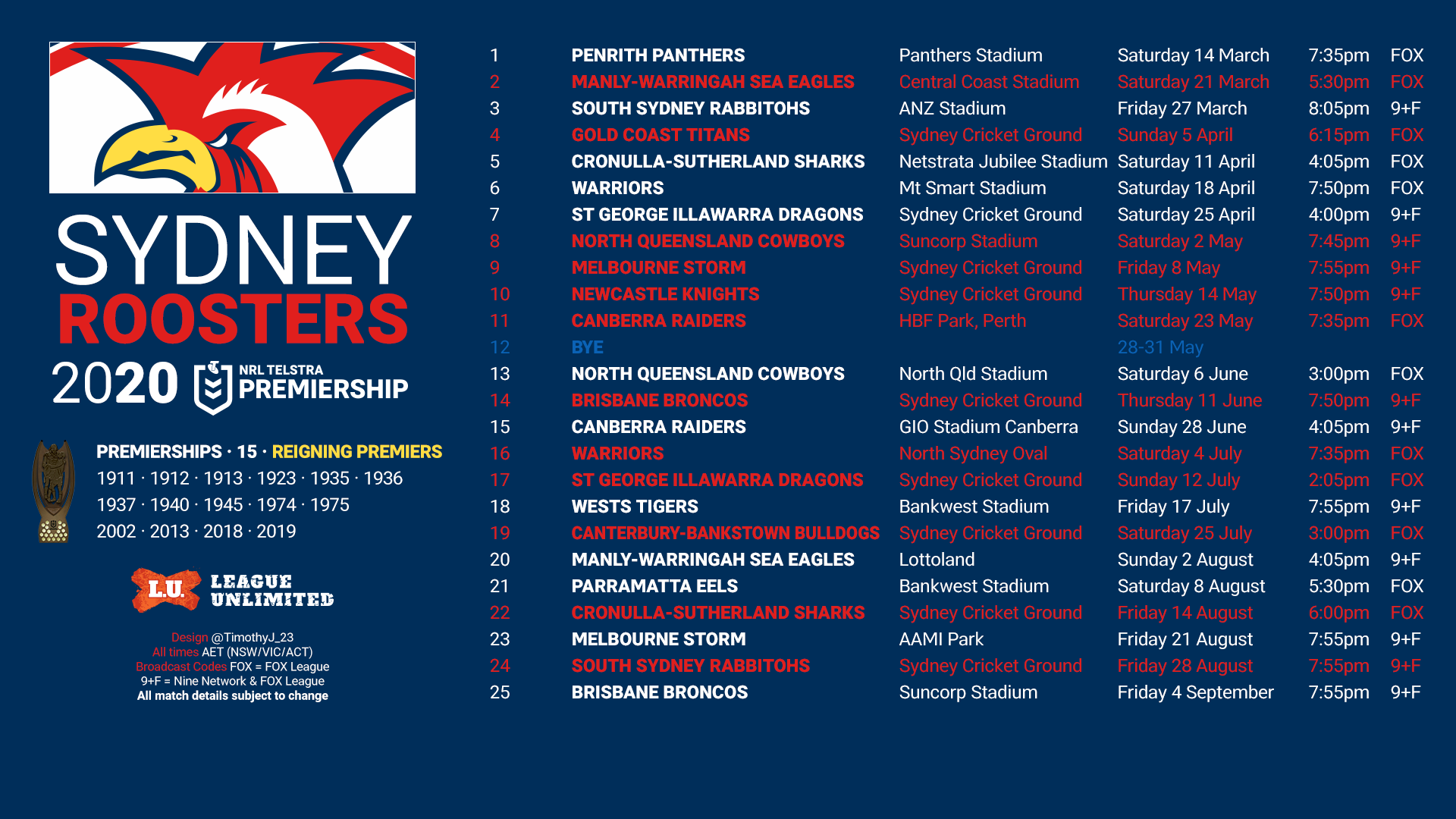 James Tedesco had a stellar 2019, scoring the match winning try in the Grand Final, the series winning try for NSW in State of Origin and winning the Dally M. Tedesco is the only player in the side that would put a dent in their title aspirations if he were to spend any extended period on the sidelines. In the argument for the world's best player, Tedesco is in career best form and is therefore the most important player in the side if the Roosters are to become legend.

Joseph Manu also firms as a key player with the highly publicised loss of 2019 centre partner Mitchell. This however could see Manu play a more focal point in the Roosters attack and he could therefore go to another level, which could see the underrated Kiwi international become the game's best centre.

Billy Smith was primed as the breakout star for the Roosters before cruelly suffering an ACL injury in the pre-season, which is likely to end the young rookies' season. Egan Butcher, the younger brother of Nathan is the other highly rated youngster looking to push his way into First Grade over the Origin period or if injuries strike. Butcher has represented NSW at both the under 16 and 18 level and was impressive in his limited stint in the Canterbury NSW Cup in 2019.