Is this the bottom? Dragons fans hope so.

2019 was a re-occurring nightmare for the joint venture club, who finished in 15th - their lowest since the 1999 merger. Can the Dragons right the ship this season, and bring some respect back to the big Red V?

Coming off their impressive 2018 finals run, the Saints waltzed into last season ready for more of the same, aided by four straight victories which included a pair of field goal match-winners from star signing Corey Norman. Early on, it looked like Saints were set for good season.

Then... it all fell apart. The Dragons only won three more games all season, slumping to a second-last place finish, only saved the spoon by a late season win over eventual "winners" of that honour, the Gold Coast Titans. It begs the question, will 2020 be any different? For the faithful - hopefully.

The only major change for the Red V's squad is the return of Trent Merrin from his stints at Penrith and in the Super League, and Norman moving into the halves with Ben Hunt. There is still the prospect of the Jack De Belin case evolving as the season progresses, which could act as an albatross around the neck of the squad depending on the potential outcome.

Looking at the Dragons side on paper, they should be competing for the finals. There is representative talent across the team, which was evident in their showing at the NRL Nines tournament in Perth. The challenge is - can Paul McGregor harness that talent for all 25 weeks this season?

One spanner already in the works comes in the form of injury concerns - captain and hooker Cameron McInnes will miss the opening rounds with injury, which makes the acquisition of former Rabbitoh and Warrior Issac Luke a wise call. Whilst the top 17 is talented, if the Dragons depth is tested it might be another long year on the southern fringes of Sydney.

Because Rugby League wants to see the world burn. The Dragons fans were baying for McGregor's head for a majority of 2019 (and still are), but if 'Mary' delivered a premiership, it would leave fans in more knots than a David Blaine stunt.

On a serious note though, whenever the Dragons have been contenders it has been predicated on their defence, so the 'red wall' needs to be erected around Wollongong and Kogarah again to be in the mix.

All the issues that presented itself in 2019 still remain.

The fullback spot will remain a merry-go-round, on which Tristan Sailor was essentially a band aid on a bullet wound late last season. The backline still lacks punch, despite a forward pack featuring Merrin, Tyson Frizell and Tariq Sims, all of whom can change games.

Lastly, the pieces aren't there for a genuine title challenge until some structural changes are made.

Dragons have a kind draw to start the season - three home games in the first month bookending tough trips to Bankwest to take on the Eels and across the mountains to face Canberra. The first half of their schedule is packed with favourable home fixtures which can help propel them into a top eight position.

Overall, the schedule makers were good to the joint venture with only three trips outside NSW all season, all three being to Queensland. The cushioned draw helps them avoid the dreaded Melbourne fixture.

The final five rounds will be crunch time with the local derby against Cronulla sandwiched between clashes with the Bulldogs, Eels and Rabbitohs. 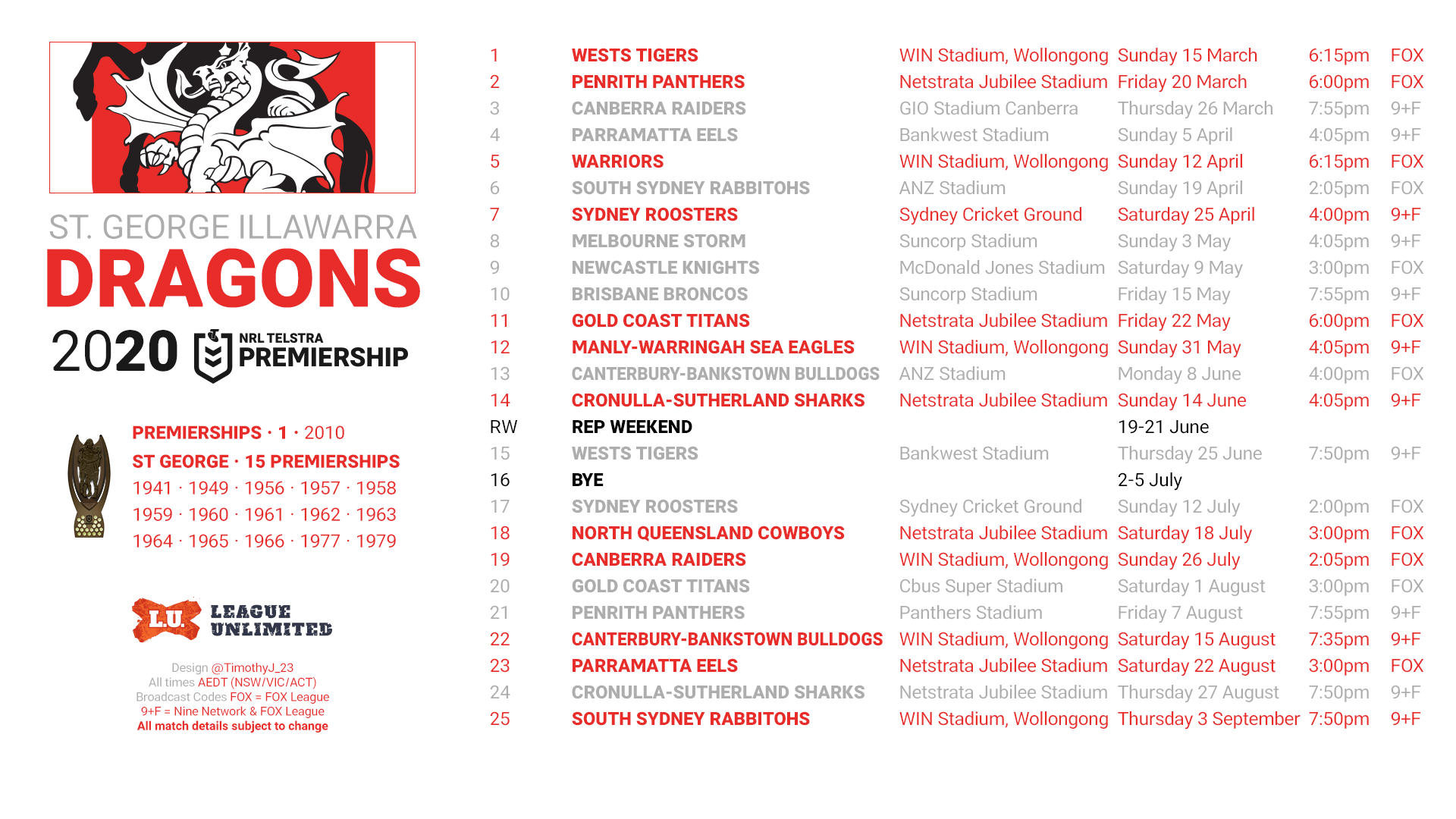 Predictably, it all falls on Ben Hunt. The mercurial halfback bears the brunt of the blame when the Dragons lose but at his best, Hunt is a gamechanger.

His kicking game can turn a contest on it's head, and his reunion with Corey Norman in the halves is key to the Dragons having a fighting chance to make any noise this season.

Tristan Sailor gave Dragons fans a glimpse of the future with his late season burst. The lively fullback lit up his debut against premiers the Sydney Roosters, showcasing his speed and scoring a four-pointer but now, with what looks like his first full season in first grade, Sailor could be the spark needed for the joint venture side.