Another season, another breakout year for Brad Arthur and his Eels.

It's a scene that's becoming all too familiar at Parramatta; 2018 was appalling, while 2019 was a year of redemption and rebirth. The Eels finished 5th in a season reminiscent of their 2017 offering, but if anything their 2019 performance brings up more questions than it answers. One in particular will be at the forefront of Parramatta and indeed rugby league fans' minds; just who are the Eels, really?

Over the last three seasons it would be fair to say we've seen three different sides playing out of the same club. The Eels of 2019 returned to the newly rebuilt Bankwest Stadium, and their homecoming saw another reinvention. They were superb in attack, using sparkling spine players and powerful edge runners and outside backs to blow quite a few sides off the park. The brutal drubbing of Brisbane in the first week of finals showed exactly the heights the Eels can reach. Unfortunately, the subsequent thrashing in Melbourne just one week later showed just how far they still have to go.

It's no surprise that the Eels are struggling for identity. For years the club has been a basket case off the field. Coach Brad Arthur is a man under constant pressure; his position one of the least desired in the NRL at a club who have shown a willingness to change based on what they feel will win the most votes at the next election. But with reforms passing over the off-season and some sense that maybe, just maybe, things have turned around off the field, it would seem Arthur and his men are beginning to find themselves on it.

Once again, Arthur has seemingly been astute in the player market. The return of Ryan Matterson on the edge is a huge signing after the departure of Manu Ma'u. Waqa Blake signed midway through last season but has already shown his value on his return from injury. Even Reagan Campbell-Gillard, struggling for form and unwanted at Penrith, will help shape a much-improved middle defence for the Eels, certainly an area of concern last season. So, while consistency may be a problem, there is plenty of reason for Parramatta fans to be confident of a good showing in 2020.

Attack. The Eels were often scintillating with the footy in hand in 2019 and should only improve in 2020. Dylan Brown has some NRL footy under his belt, as do fellow rookies Reed Mahoney and Maika Sivo, while edge weapon Waqa Blake will have had his first full off-season within the Eels patterns and structures. Ryan Matterson will fill the hole left by Manu Ma'u brilliantly. Already the kind of side you cannot let out to a start, the bolstered Eels attack will be a serious source of anxiety for most of their opponents. When they're on, and they have the momentum in a game, Parramatta are unstoppable.

To put it bluntly, Parramatta just can't seem to run with the big dogs. Consistency can be fixed, inexperience in closing a close game comes good with time, but you need to beat the best to win the NRL. Their record against the Roosters and Melbourne is frankly terrible and they did nothing to improve it in 2019. In three games against the top two sides, the Eels came away with zero wins and an embarrassing combined score line of 128-28. They were never in the fight and their capitulation in Melbourne, just a week after notching a record-breaking finals win, showed there had been no improvement in that regard.

The Eels' first full season at Bankwest Stadium (they had to play two matches at ANZ before it opened last year) starts in the opening round when they host Canterbury to kick off the 2020 premiership. The first few months see the Eels on the road quite a bit with three visits to Queensland, along with trips to Darwin and Melbourne in the first ten rounds.

Heading into Origin 1 though, the blue and gold host three consecutive home games at Bankwest, and don't leave Western Sydney at all between mid-May and mid-July.

Trips to Canberra and Brisbane punctuate a run home that's fairly favourable, and sees the Eels not worry about any more plane travel for the final five rounds, finishing with a mouth-watering local derby against Penrith out west in the final round. 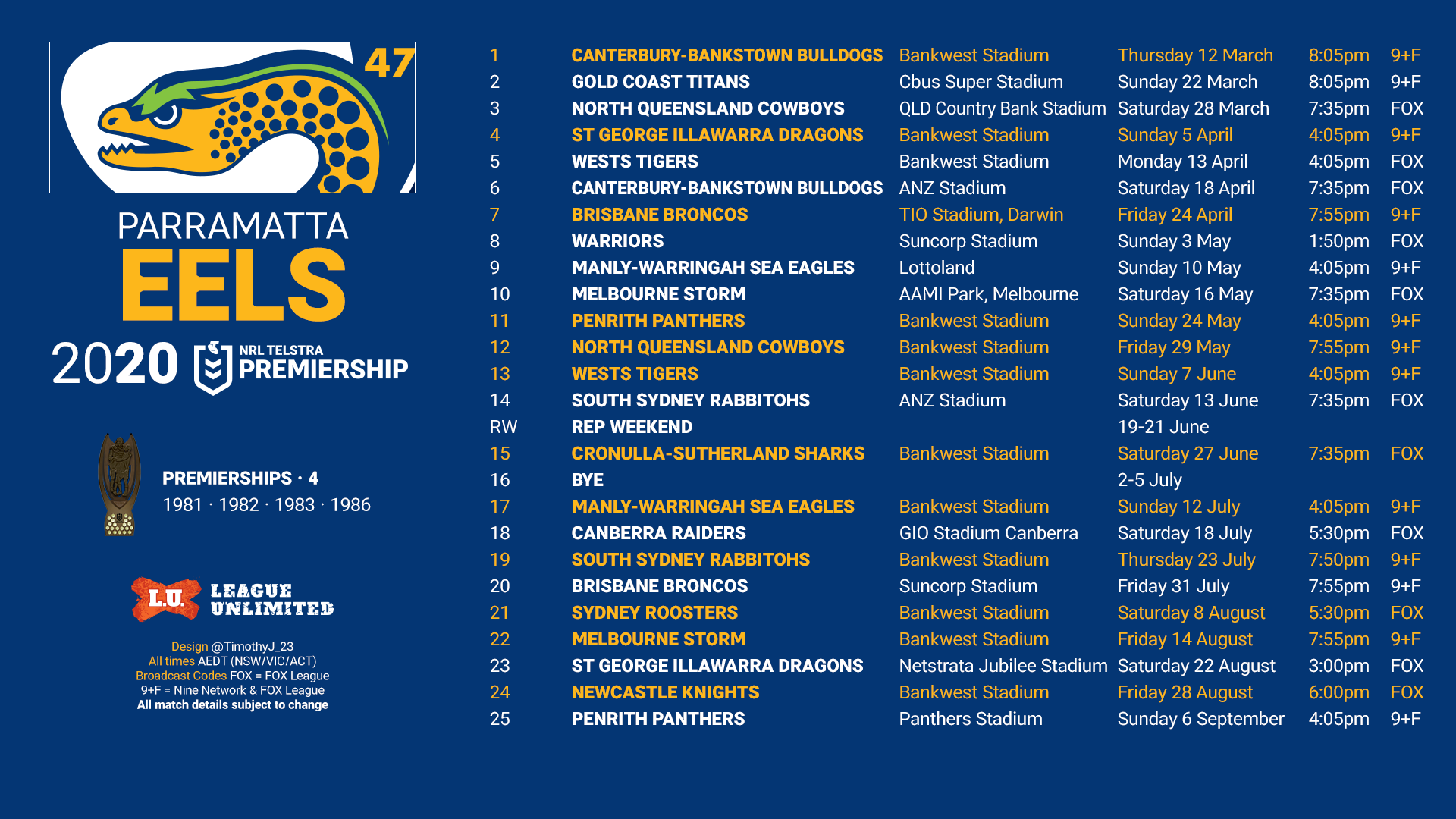 Once again, a lot rests on the shoulders of Mitchell Moses. After an outstanding 2019 season the Eels will rely on him to get their impressive attack going. Can he repeat the effort in 2020?

Ryan Matterson and Waqa Blake shape as key cogs in the Eels machine. Matterson has some underrated shoes to fill as a replacement for Manu Ma'u, whose footwork and passing ability created plenty out on the Parramatta edge. Blake showed more than a glimpse of what he's capable of when he returned from injury at the back of the season, but he will see a lot of the footy with the try-scoring potential that sits outside him, and he will need to be on his game.

Workhorse backrower Andrew Davey is worth a mention; an older player who may not be a freakish talent but is equally good on and off the ball and may be considered in case of injury.