2019 saw Cronulla-Sutherland forced into a year of transition - as they began a new era with a new coach in John Morris, who took over from Shane Flanagan early in the year who was de-registered after it was found he had breached the conditions of his suspension in 2014.

It was also the final season of club stalwart and the clubs only Premiership winning captain, Paul Gallen. The oft-maligned forward will leave a big hole at the Sharks, however John Morris made sure he brought through plenty of fresh young talent to help fill the big man's absence in 2020.

The Sharks narrowly achieved a place in the finals for the fifth consecutive year, but bowed out somewhat surprisingly in the first week of the finals against an understrength Manly side. 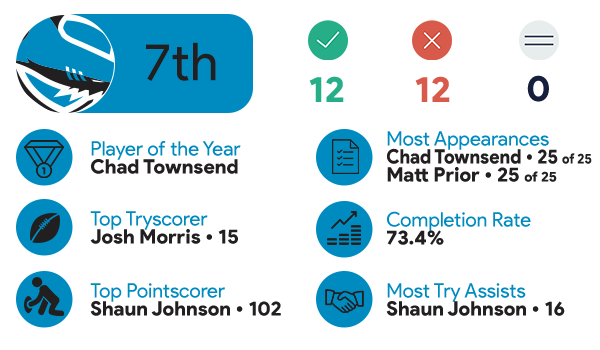 Cronulla had lost 5 straight games leading into their Round 19 clash with the lowly and struggling Cowboys. Of those five losses, four included matches where they scored more tries than their opponent. Goal kicking finally helped them win against the Cowboys, which was one of 5 wins over their last 7 games, catapaulting them from 11th place up to 7th and into the finals.

John Morris and his blooding of rookies. Morris was meticulous with which juniors he brought in and when, as well as who to keep in the top grade and who to rest.

Exciting centre Bronson Xerri missed just 3 games, while back rower Briton Nikora played just 12 NRL games in his rookie year before earning a call up into the New Zealand test side.

Ronaldo Mulitalo earnt a Test jumper at the end of the year with Samoa, while young lock Billy Magoulias ended the 2019 season playing for Greece.

In the second last round of the year, they lost to Canberra by 1 point yet missed three goals.

Josh Morris was an interesting signing for the Sharks for 2019, with some unsure if he was a wise purchase. But boy did he prove them wrong - 'J Moz' had one of the best seasons of his long career, crossing for 15 tries in 2019, his highest tally for a season since his 17 in 2012 with the Bulldogs.

Bronson Xerri got called into the Sharks side in Round 4 and was so impressive that he played in every game for the Sharks for the rest of the season. Blistering speed and a genuine try scorer, he started to get comfortable in his role and started improving his game even further at the back end of the season.

Matt Moylan had finished 2018 in the halves and in pretty good form, but with the acquisition of Kiwi test half Shaun Johnson coupled with the loss of Test star Valentine Holmes to NFL, Cronulla needed a fullback and so Moylan was moved back to the custodian role. Injuries and poor form saw him play just 11 uneventful games.

Johnson had come to the club with plenty of fanfare and excitement, but his first half of the season was pedestrian. He did improve dramatically at the back end of the year, which should give the Sharks fans a bit more faith in him for 2020 though.

Aside from Xerri and Nikora - who were the standout rookies at the club in 2019 - young winger/fullback William Kennedy showed he has plenty of promise and could well be pushing for a spot on the wing in 2020. And if the Sharks end up parting ways with Matt Moylan, fellow rookie Ronaldo Mulitalo could move into the vacated fullback role.

The Sharks' feeder side Newtown finished midtable, which also happened to be inside the top 8. They had a dream run of form through the finals which saw them reach the Grand Final, where they beat Wentworthville Magpies 20-15. Newtown then went on to beat the Burleigh Bears in a thrilling encounter to be crowned NRL State Champions on NRL Grand Final Day.

Almost the inverse of their Canterbury Cup counterparts. The Sharks' Under 20 side cruised to the minor premiership and looked set for another Grand Final appearance, but fourth-placed Canberra pipped them in the opening week of the finals, before the eventual premiers - fifth-placed South Sydney - eliminated them in extra time in Week 2.

The Sharks have a solid squad, with plenty of speed out wide in the backs, plenty of skill in the halves and genuine strength in the forwards.

A great mix of youth, experience and players at the peak of their careers, lead by the magnificent Wade Graham should ensure Cronulla are again a side in the finals come next September.